No Yes
The Death of Lucretia painting at The Bowes Museum

The Death of Lucretia painting has been owned by The Bowes Museum in County Durham since the 1840s and has recently gone on display as part of an exhibition dedicated to the works of Italian Baroque master Guido Reni.

However, the origins of the painting are shrouded in mystery – it is believed the piece could be from the studio of Guido Reni, or at least painted during the same period in the seventeenth century, before then being significantly changed during a re-paint some 200 years later.

Now art conservator and Senior Lecturer Nicky Grimaldi and forensic scientist Dr Michelle Carlin, both of Northumbria University, have worked in partnership with The Bowes Museum to help shed light on the history of the painting.

Using state-of-the-art technology and techniques, they have been able to look under the layer of paint which is visible to the naked eye – revealing a very different painting underneath the present day image.

Thanks to forensic techniques such as chemical analysis of the paint pigment, the pair have been able to identify when the different layers were painted and start to put together a picture of how and when the painting was created.

As Nicky Grimaldi explains: “When we first started working on this painting we had no idea what lay beneath, it was quite a revelation to find that there was essentially a whole other painting under the one we see today.

“The torso in the current version has been completely changed at some point, in the original version Lucretia was depicted wearing an elaborate bodice, which is now hidden.

“We believe the original version was probably left incomplete, but was then likely significantly repainted in the nineteenth century, before being sold through an art dealer in London and then arriving at Bowes Museum.”

Chemical analysis of paint from the different layers has helped to date the painting, with the earlier paint containing much coarser particles than the paint added later.

As Dr Michelle Carlin explains: “There was a clear difference in the particle size between the layers. The paint added at a later date was produced post-industrialisation, by which time the process had become mechanised, meaning the particles were ground much finer. In contrast the particles in the paint underneath were much less refined.

“Similarly we were able to analyse the materials used to make the paint in the two layers and match this with what we know was available at the time to help determine when each layer was painted.”

One of the most unexpected finds during the investigations was the presence of gold on the torso area of the painting, discovered by using a portable x-ray fluorescence spectrometry. This suggests the original bodice might have contained gold braid detailing.

Also discovered was the presence of titanium white in the panting, a pigment used by art conservators during the 20th century, suggesting the painting has been subject to conservation efforts in the past.

This ability to bring together experts in both art conservation and forensic science has led to Northumbria University developing an international reputation for this kind of specialist research.

This exhibition has been conceived and developed by Bernadette Petti, Project Curator, who initiated the collaboration with Northumbria University and colleagues at The Hunterian and National Gallery.

Lucretia was an ancient Roman women who killed herself after being raped by the son of King Lucius Tarquinius Superbus. Her tragic death has been portrayed by many artists, with Lucretia often seen clutching a dagger to her chest.

Guido Reni (1575 - 1642) is the most famous Italian artist of his generation, with many of his works depicting female heroines, including Cleopatra, Mary Magdalene, Deianira and Lucretia.

The Bowes Museum exhibition presents works by Guido Reni from prestigious public and private collections, including The National Gallery and The Royal Collection.

Despite what Nicky Grimaldi and Dr Michelle Carlin have already discovered, the mystery doesn’t end there.

It is believed there is an almost identical copy of The Death of Lucretia in existence, suspected to be the original Reni painting from which the Bowes later repaint was copied from.

This painting could hold the answer to many of the questions the Northumbria researchers still have. However, it is believed the painting hasn’t been in circulation since the early twentieth century and its whereabouts is presently unknown.

As Nicky Grimaldi explains: “It is quite common for copies of paintings to be made, sometimes by the original artists and sometimes by their studio apprentices or by other unrelated artists.

“We know there is another version of the image of Lucretia we see portrayed in the Bowes today. We suspect the other painting is still in Italy and has almost the same dimensions and composition, though unfortunately we don’t know its exact location.

“If we could track this painting down it could be the missing piece of the puzzle and help us to fill in some of the gaps we have around the Bowes painting.”

Nicky Grimaldi will be speaking at a panel discussion entitled Is All Art Activism? at The Bowes Museum on Saturday November 30, organised by arts and education training company Changing Relations to coincide with the exhibition.

The panel will discuss the social motivation behind Reni’s work and his decision to depict the death of Lucretia – one of the most significant historical occurrences of violence against women. 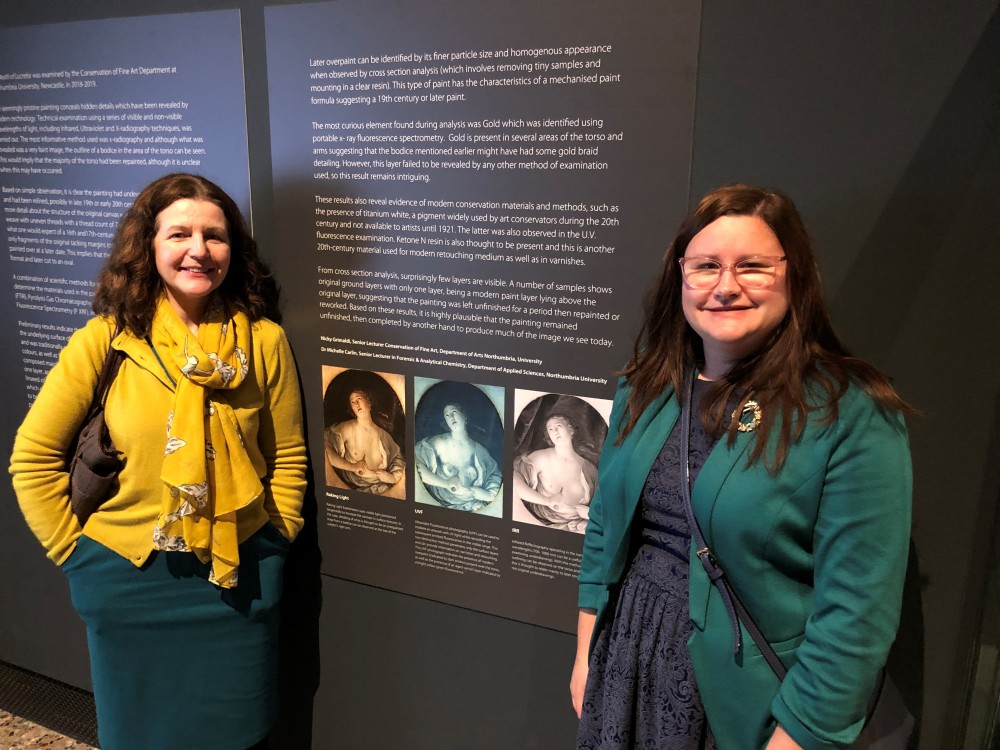 Northumbria University is proud to announce that a Knowledge Transfer Partnership project, which has brought together industry and academic experts to develop a new biomedical device, has been given the highest possible rating by an independent government assessor.

​A Northumbria University historian has been awarded £1.2m to research the role immigration played in developing new technologies around the eve of the Industrial Revolution.