A collaboration between the University and Northumbria Police, ‘Suspects, Secrets and Lies’, was created to teach young people about the realities of crime detection and forensic science and encourage them to consider studying related courses at degree level.

Alan Langford, Senior lecturer and Programme leader of Criminology and Forensic Science, said: “At the Suspects, Secrets and Lies event, we developed a case study which involved a multi- disciplinary approach, allowing us to involve the police investigation through to looking at finger printing examination, digital evidence and how the media would cover it, then finishing in the court environment.

To a large extent, what we wanted to illustrate was that Forensic Science is not just one discipline, but a whole variety of disciplines, predominantly biology and chemistry, but then also the police’s involvement with the area too.”

‘Suspects, Secrets and Lies’ was delivered through a fun and educational role-play scenario combining an engaging ‘whodunit’ storyline, which gave pupils the chance to try out real forensic techniques, gather evidence, and even play out a mock courtroom scene.

Sessions led by University and Northumbria Police experts included suspect interviews, mobile phone forensics, and fingerprinting. There was also guidance on how to produce a news bulletin and how crime is reported in the media, which took place in Northumbria’s state-of-the-art TV studio.

Detective Inspector Gordon Makepeace, of Northumbria Police, said: "This is a great opportunity for young people to learn how a crime is investigated and the steps police take to make sure perpetrators are put before the court and we're delighted to once again be offering our support the this initiative.

"The event provides a unique opportunity for young people to see the practical and exciting aspects of science and an opportunity for the wider police family to attract new talent."

“From analysing mobile phones and dusting for fingerprints to seeing the court case play out in the media, the Suspects, Secrets and Lies event highlights the expertise of our forensic scientists as well as the processes employed by the police.

“At a time when forensic science is glamourised in popular culture and TV dramas, such as CSI and Silent Witness, it is important that people planning to go into this field of study are aware of the realities of criminal investigative work.

“We are delighted to collaborate with Northumbria Police to offer this experience to young people.”

Northumbria University offers a diverse range of courses for students that are interested in Forensic Science, Journalism and Digital Forensics.To find out more about the forensic science degree programmes we offer, visit https://www.northumbria.ac.uk/

To celebrate the launch of a brand new crime-writing festival, students from Newcastle’s Heaton Manor School paid a visit to Northumbria University to test their very own crime fiction stories on a panel of experts.

Science... but not as you know it!

As part of its role as associate partner in the world-famous British Science Festival event, Northumbria University is gearing up to a six-day showcase to help answer the question, what is science? 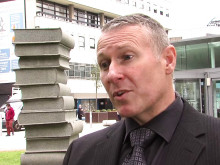