Academics from Northumbria University’s Centre for Forensic Science worked with a team from the University of Leicester’s Departments of Chemistry and Criminology, Northamptonshire Police and The Royal London Hospital Museum to tackle the riddle of the ‘Blazing Car Murder’ from over 80 years ago.

The case involved the murder of a male in a car fire in Hardingstone, Northamptonshire, on 6 November 1930. Alfred Rouse was convicted, and later hanged, at Bedford Gaol in March 1931, for murdering his victim who to this day, has not been identified. At the time, a post mortem examination was carried out in the garage of the local public house by the Home Office-appointed pathologist Sir Bernard Spilsbury, working alongside another local pathologist.

Sir Spilsbury reported that lavender coloured material and light brown hair were found at the scene. It was further documented that the victim’s jawbone was removed to assist with possible identification and tissue samples taken for microscopical examination.

Two of these tissue samples are still in existence and archived in The Royal London Hospital Museum: one from the prostate to confirm the sex of the victim, and another from the lung to determine whether or not the victim was already dead before the fire was started.
In recent months, attention has turned to the fact that a man named William Briggs left his family home in London to attend a doctor’s appointment at around the same time the crime was committed - and was never seen or heard of again.

As part of their family ancestry research, the relatives of William Briggs wanted to verify earlier generations’ belief that their ancestor may have been Rouse’s car murder victim.
Last year, a number of William Briggs’s relatives approached Northamptonshire Police in an attempt to put the 83-year-old mystery to rest and finally reveal the identity of the victim.

They met with the Force’s curator and archivist Richard Cowley, discussed the story of the murder and were shown artefacts relating to the crime which, at the time received worldwide attention.

With the help of Northamptonshire Police, the family contacted University of Leicester academic Dr John Bond OBE. He and Dr Lisa Smith negotiated with The Royal London Hospital museum to allow one of the remaining tissue samples to be examined.

The slide was released with the approval of Professor Richard Trembath, at Queen Mary College University of London. The slide originates from the old Department of Forensic Medicine which formed part of The London Hospital Medical College. The College was merged with Queen Mary College in 1995.

The University of Leicester team considered whether there might just be enough mitochondrial DNA (mtDNA) left on the slide to get a profile to compare with mtDNA from the family.

Mitochondrial DNA is wholly inherited from the maternal line so it is essential to have an unbroken maternal line of descendants to test.

University of Leicester worked with Dr Eleanor Graham and Victoria Barlow from Northumbria University’s Centre for Forensic Science to carry out DNA analysis on the samples to see if there was a match from the sample and the relatives.

Fortunately, the scientists obtained an mtDNA profile from the slide to compare to the family. The result is due to be revealed to the family on the BBC's The One Show on Monday 20 January 2014.

Dr Eleanor Graham from Northumbria University stated: “Projects such as this highlight the fact that forensic DNA analysis is not confined to ‘catching criminals’.

DNA analysis also has a critical role to play in the identification of those who have been killed during criminal acts, accidents or natural disasters, which have occurred recently, or many years ago.”

Dr John Bond, from the University of Leicester said: "It's been very interesting and rewarding working on such a famous, local murder case. It was quite a unique investigation to be involved in, as the perpetrator had been identified long ago and brought to justice while the victim's identity remained unknown.

“It was a great example of how the scientific and criminological expertise at the University of Leicester and Northumbria University, working together with the police, could provide answers to this family after 83 years.”

Detective Chief Superintendent Paul Phillips from Northamptonshire Police said: "From our perspective this is a closed case, the offender Alfred Rouse was convicted of murder and hanged, but this has been a long-standing mystery in Northamptonshire as the identity of the victim has never been established.

"Our work at Northamptonshire Police is victim focused so I was delighted to learn of new opportunities to establish the identity of the victim through the development of forensic science.”

Blazing Car Murder background: Alfred Rouse sustained a head wound in the First World War, which left him with a personality disorder, to the point that he was described as ‘a promiscuous rake with an enormous sexual appetite’.

Rouse was a commercial traveller who went all around the country and his promiscuous lifestyle resulted in him facing severe financial problems. As a consequence, Rouse devised a plan to murder a homeless tramp who would not be missed by anyone which would enable him to stage his own death in a car accident and then disappear to start a new life free from financial restriction. To that end, Rouse rendered his victim unconscious, placed him in the driver’s seat of his car and set the car alight.

Rouse was making his way from the scene but bumped into two local youths keen to see what was going on and take part in some late Bonfire Night celebrations. This initial contact eventually led to Rouse’s arrest. He was convicted at Northampton Assizes and hanged in Bedford on 10 March 1931.

The local Herald newspaper suggested that the identity of Rouse’s victim ‘would likely remain a mystery forever.’ But will it……? 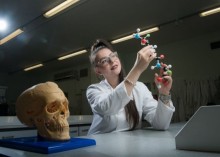