A team of researchers, including renewable energy experts from Northumbria University, has received significant funding to revolutionise the fabrication and application of photovoltaic devices used to produce solar energy.

Along with colleagues from the universities of Bristol and Loughborough, scientists from Northumbria aim to create a new technology that will allow solar panels to be integrated into windows, cladding and rooftops – allowing urban areas to generate their own clean and renewable energy.

Unlike established solar technologies, the SoIPV project will focus on developing inorganic semiconductor junctions, which emit less carbon during fabrication. Crucially, they can also be made flexible, semi-transparent and adapted to a variety of systems and infrastructures, meaning they can be more easily integrated into buildings.

The Northumbria University team is led by Dr Devendra Tiwari, supported by Professors Guillaume Zoppi and Neil Beattie. They have been awarded over £600,000 for their part in the research project.

Dr Tiwari said: “To me, the highlight and challenge of the proposal are right there in the project title – ‘Solution Processing’. Solution processing is much less capitally intensive and is much more readily suited to allow integration of solar cells to scaffoldings and windows than current manufacturing technology prevalent for thin-film solar cells.

“It, therefore, offers the opportunity to produce cost-effective integrated PV systems. The challenge is to demonstrate marketable performance and process scalability and solve issues from atomistic to device level. Such multilevel versatility and expertise to realise this lab-to-fab transition is what Northumbria brings to the team.”

There are currently only two solar cell technology types in the market – one based on Silicon and two others using inorganic compound semiconductor-based thin-film solar cell (TFSC) technology.

Because of its sleek architecture and low-temperature manufacturing, TFSC can be more easily coupled with building materials of glass and plastic composites. The solution processing which will be used as part of the project also allows for easier fabrication on curved surfaces.

The SolPV project aims to offer an alternative to an existing TFSC technology based on Copper Indium Gallium Selenide (CIGS). The team will develop a next-generation alternative – Copper Zinc Tin Sulpho-selenide (CZTS).

Northumbria University's role will be to develop scalable solution-processing and prototype high-performance solar cells using copper, zinc and tin – all of which are abundant and low-cost. They will replace the indium and gallium used in current PV technology, which in contrast are rare and expensive.

The team will also devise new methods of manufacturing solar cells which will enable them to be integrated more easily into windows, buildings, automotive and aerial vehicles without affecting primary functionality – therefore driving all-around sustainable electrification.

This innovation will also reduce the need to use rural, cultivatable land for solar panel farms, as well as extra infrastructure to transport electricity from remote locations to cities.

The award of funding for the SolPV project is a further example of Northumbria University’s long and successful track-record in solar cell and energy research.

In 2019 Northumbria, in collaboration with Newcastle and Durham universities, launched the EPSRC Centre for Doctoral Training in Renewable Energy Northeast Universities, with the aim of training 65 PhD students over five years.

Known as ReNU, the centre received funding of £5.5m from the Engineering and Physical Sciences Research Council, with contributions from industry partners bringing the total project value to approximately £11 million.

Northumbria University has also recently formed the Energy Futures group which brings together researchers from a diverse range of disciplines with a central vision to achieve net zero carbon emissions.

Video caption: SnS domains can be seen as the spots that light up quicker in the video attached. This image was recorded using the NanoESCA facility at the University of Bristol.

The Centre for Process Innovation Catapult

​Northumbria University has been chosen to participate in a €4.8 million project to tackle the issue of renovating residential buildings in Europe to make them more energy efficient.

Researchers from Northumbria University in Newcastle, and Bogazici University in Turkey, have discovered a new way of examining the structure and dynamics of single protein molecules within the human body – which could help scientists better understand the progression and possible treatment of diseases such as cancer.

Construction has started on a building which could transform the way we live. 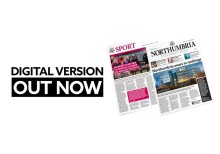 Our Spring 2021 newspaper is available to read online now.