Despite memories of the Great North Run Opening Ceremony still fresh in our minds, the organisers of the extravaganza, Great North Run Culture, are already putting their thinking caps on for 2015 and beyond.

This week, they announce the winners of the Great North Run Culture graduate artist commission – a new opportunity created through their partnership with Northumbria University, Newcastle.

Hope Stebbing and Oliver Perry, recent graduates of Northumbria’s Fine Art degree successfully pitched their artistic concept to a selection panel, which included Beth Bate, Director of Great North Run Culture, as well as Ronan McCree, Fiona Crisp and Jamie Steane, representing the art and media departments of the University. As a result, the duo will receive £4,000 to develop their artistic vision in celebration of the Great North Run and their work will be unveiled in time for next year’s world-famous half marathon event in September.

“The standard of submissions we received from the students was incredible,” said Beth, “and we’re so pleased to have started this partnership with Northumbria University. What we liked about Hope and Oliver’s proposal was the way they intend to integrate their work with the course the run takes, disrupting, whilst also working with, the landscape.”

The pair, who will start work on their installation early in the new year propose to create 1.2 metre high concrete letters, spelling out the words ONWARD, TOGETHER, AS ONE, which will be displayed around the course inspiring the participants and the north east as Great North Run Culture looks to build on a regional sense of pride following a hugely well attended ceremony in September.

“We’re very pleased to have been chosen to create a piece of art for the Great North Run,” commented Hope, Oliver continued “it’s so synonymous with the north east and for our installation to be part of that is brilliant. We’re really looking forward to getting started.”

Fiona Crisp, Reader in Fine Art at Northumbria said: “Hope and Oliver are beneficiaries of Northumbria’s ‘Graduate School Northumbria’ scheme where graduates are given the space and time to evolve networks and entrepreneurial activity whilst continuing to develop their creative work – they both richly deserve this prestigious award and the fantastic professional opportunities it brings.” 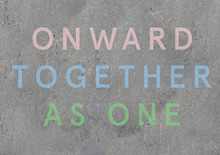 COMMENT: Great North artwork by Northumbria students at World’s most famous half marathon

Pop up art from two of Northumbria University’s Fine Art graduates will be installed along the route of this year’s Great North Run.