Pop up art from two of Northumbria University’s Fine Art graduates will be installed along the route of this year’s Great North Run.

Graduate artists Hope Stebbing and Oliver Perry, will see their bold and inspiring work shown in three specific locations around the route of the run, borne out of a brand new partnership between the University and the Great North Run organisation.

The project, ONWARD TOGETHER AS ONE, which will have large sculpted letters spelling ‘onward’ ‘together’ ‘as one’ will be shown in three specific locations around the route of the run. Appearing on the morning of Sunday 13 September and disappearing with the 57,000 runners after the race, the artists’ have taken the idea of over fifty thousand individuals moving through the course as though they were one, all connected and communicating, ebbing and flowing, moving forward together.

The partnership between Great North Run Culture and Northumbria, offered a £4,000 commission to a final year or recent graduate to create a piece of work that responds to and captures the spirit of one of the World’s top sporting events.

Jamie Steane, Principal Lecturer at Northumbria said: “The immediacy and spirit of Hope and Oliver’s initial proposal brought a warm smile to all of the judges’ faces, and that’s just what you want from a piece of public art that's actively trying to engage with its audience of runners and spectators. We are now looking forward to seeing their bold, metre high, typographic messages of support for the runners installed on three great sites alongside the course.”

“Working with Great North Run Culture has been a continual pleasure for both students and staff at Northumbria University. We have worked together on a number of exciting initiatives from student art commissions and film productions through to helping support Millionth Runner events last year. We are currently on a number of exciting projects and look forward agree new ones for the forthcoming years."

This summer Great North Run Culture launch their 11th year of cultural programming which is inspired by the Great North Run. Great North Run Culture explore and celebrate the areas where sport and art meet, through art exhibitions and installations, films and moving image, workshops, events and community activities they look for new ways to give a different perspective on the world’s largest half marathon.

To find out more about Oliver and Hope’s work, visit: www.oliver-perry.com or www.hopestebbing.com 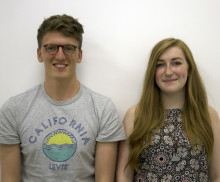 Local graduates to create one-off piece of art for region