A team of world-leading Polar experts have been trialling a new tool to better predict how ice sheets will evolve over time.

Northumbria University, Newcastle is already known as a centre of excellence for research into cold and palaeo environments. It has an outstanding group of glaciology experts with extensive expertise of undertaking research in both the Arctic and Antarctic regions.

The University is currently developing a new modelling tool that will help researchers working in Arctic and glacial regions to predict how ice sheets will adapt and behave in different environments. The tool is particularly useful for researchers as it is flexible and can recalculate the behaviours of ice sheets to understand how they will evolve over time.

Researchers showcased the tool to attendees at an international workshop on ice flow modelling. Attendees took part in sessions to learn how to use the model and were also able to hear from global experts including representatives from British Antarctic Survey and the Institute of Climate Impact Studies.

Hilmar Gudmundsson, Professor of Glaciology at Northumbria University, said: “There are a number of good tools which can help to model how ice flow will adjust in response to different environmental circumstances. Many of these focus on the past to model the historical behaviour of ice sheets.

“However, the model we are developing here at Northumbria has proved particularly good at calculating and recalculating the behaviour of large ice sheets in Greenland and Western Antarctica. It is already underpinning the work of groups in Germany, Denmark and the UK, demonstrating the strength of our ice flow modelling expertise.”

One of the experts using the new tool is Christine Hvidberg, Professor of Ice Flow Modelling at the University of Copenhagen. She said: “We came to learn about this model and it has been a fantastic experience. The sessions have been really well documented and Northumbria’s model will prove invaluable for our own further research into Greenland’s ice sheets.”

Northumbria University’s expertise in the modelling of ice flow was confirmed in April, when it was announced that Northumbria would receive £754,000 from the Natural Environment Research Council (UK) and the National Science Foundation (USA). The funding was awarded for research into two large projects to better understand how and when Antarctica’s massive Thwaites Glacier might collapse.

As part of this award, Professor Gudmundsson will be working on a £648,000 project to develop new computer modelling processes to model the history and evolution of the glacier and its ice flow. Working with experts from the University of California, Irvine, the model will provide an understanding of what has driven change in the glacier in the past to enable them to make predictions on how it will evolve in future.

Earlier this summer, it was announced that researchers from the Department of Geography and Environmental Sciences had discovered three huge valleys buried deep below the South Pole for the first time. 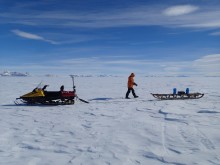