A new £20 million research collaboration has been announced today (Monday 30 April) between the UK and USA to gather data on the Thwaites Glacier, with the aim of establishing whether the glacier will collapse over the next few decades or centuries.

Antarctica’s glaciers contribute to sea-level rise when they lose more ice to the ocean than is replaced by snow. The Thwaites Glacier is approximately two thirds the size of Britain, and its collapse could significantly affect global sea levels, causing them to rise by between three and five metres. The glacier is already impacting global sea levels as it loses ice into the ocean. Scientists are worried that this may just be the beginning and that ice loss may accelerate in the future.

To better understand how changes in the glacier have previously occurred, and are likely to occur in future, the UK’s Natural Environment Research Council has joined forces with the US National Science Foundation to fund eight large-scale projects over five years that will bring together leading polar scientists in one of the most inhospitable regions of the planet. 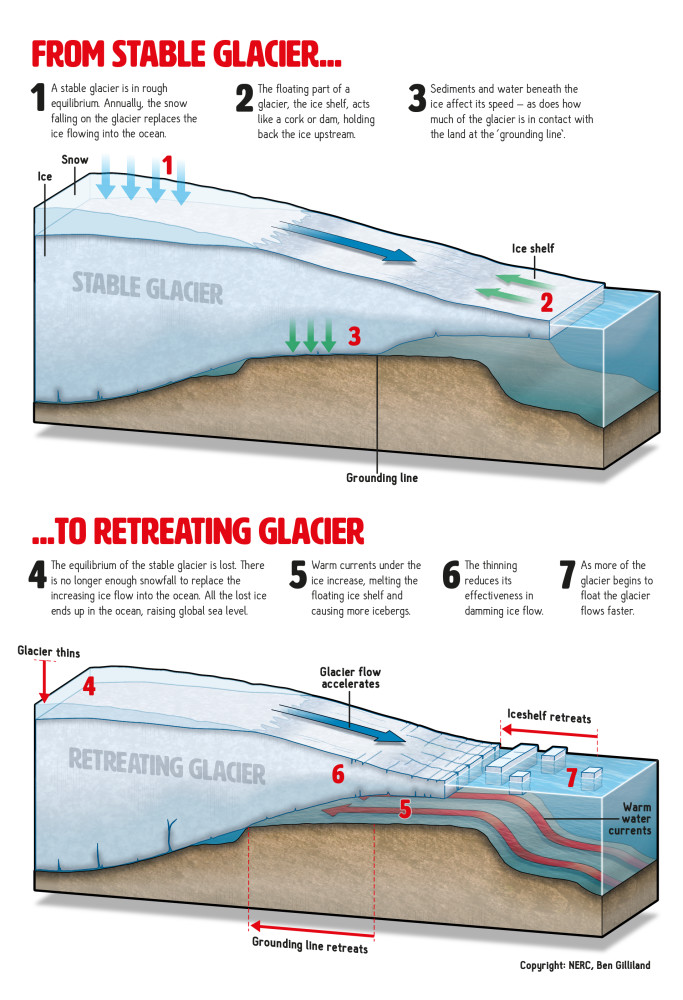 Several US and UK universities are involved in the project, with Northumbria University receiving the largest amount of funding among UK universities. Northumbria academics have been selected to play a role in two of the eight projects, reflecting the University’s growing international reputation for research into cold, palaeo and extreme environments.

Hilmar Gudmundsson, a Professor of Glaciology and Extreme Environments in the University’s Department of Geography and Environmental Sciences, is the principal investigator on a project called PROPHET, which will to develop new computer modelling processes to model the history and evolution of the glacier and its ice-flow. This will allow the group to understand what has driven change in the glacier and will enable them to make predictions on how it will evolve in future.

Working with experts from the University of California Irvine on this study, Northumbria will receive £648,000 for its work on this project, with the American institution receiving the same amount.

Meanwhile Professor John Woodward, Associate Pro-Vice-Chancellor for Research and Innovation in the Faculty of Engineering and Environment, is co-investigator on the GHC project, which is sampling bedrock beneath the ice sheet. The GHC team will be working to identify if and when the glacier retreated in the past; and if so, how it recovered and how it is currently responding to environmental conditions.

Professor Gudmundsson explained: “Understanding the dynamics of the Thwaites Glacier and quantifying its future impacts on global sea levels is not only a challenging and exciting scientific problem, but also a question of great societal significance. This region of the Antarctic Ice Sheet is losing ice at an accelerating rate, and the reasons for this ice loss are not fully understood.

“The Thwaites Glacier is partly grounded on land, but with a substantial shelf of ice floating within the ocean. Ice shelves have the capability of holding ice further upstream back on the glacier. They are sometimes referred to as the ‘safety band’ of the glacier and if a shelf breaks, this safety band becomes smaller. In our project, we will be working to establish how the ice shelves on the glacier break and how this affects the flow of ice from further upstream.

“Huge progress has been made in ice-flow modelling over the last ten years and we will now be able to make much better predictions and respond to various big questions that we have not previously been able to address.”

The University will receive £106,000 for its work on the GHC project, with Professor Woodward expected to spend three months in Antarctica leading field surveys to find the best sites to drill to sample for evidence, or not, of any former collapse of the ice sheet.

He said: “We don’t know whether the glacier has retreated in the past or not. To establish whether it has, we need to drill through 200 metres of ice into the bedrock below to find out whether the bedrock has been exposed to cosmogenic rays from space in the past.

“These rays impact on the composition of the rock and how nuclei decay over time and will help us to establish whether current changes to the glacier are unique and are a rapid and catastrophic response driven by significant changes in global climate. Or, it may be ‘business as usual’ and part of a normal cycle that we’d expect to see from these Antarctic glacier systems.

“The fact that Northumbria is involved in two of the eight funded proposals reflects the world leading strength of the science in this field at Northumbria University.”

The International Thwaites Glacier Collaboration is the largest joint project undertaken by the UK and USA in Antarctica for more than 70 years.

Speaking at the launch event for the project, British Science Minister Sam Gyimah, said: “Rising sea levels are a globally important issue which cannot be tackled by one country alone. The Thwaites Glacier already contributes to rising sea levels and understanding its likely collapse in the coming century is vitally important.

“Science, research and innovation is at the heart of our Industrial Strategy and this UK-US research programme will be the biggest field campaign of its type ever mounted by these countries. I am delighted that our world-leading scientists will help leading this work.”

Northumbria University’s Cold and Palaeo-Environment research group carries our research around the globe, ranging from the tropics to the Polar regions to investigate both modern and ancient environments. The group specialises in research relating to ice, snow and permafrost and past climate and environment.

The Climate Change Challenge – how can we live more sustainably?

Over the coming weeks you’ll be hearing a huge amount in the news about COP26, but what is it, and why is it so important?
COP is the United Nations’ annual climate change conference. It is the world’s most significant summit on climate change and this year, it is being held in the UK for the first time.
COP stands for the Conference of Parties and this year is the 26th conference – hence CO