No Yes
Radar surveys across the Transantarctic Mountains

The findings are the first to emerge from extensive ice penetrating radar data collected in Antarctica as part of the European Space Agency PolarGAP project and have been published in the journal, Geophysical Research Letters.

Although there are extensive satellite data that help image the surface of the Earth and its deep interior, there was a gap around the South Pole area, which is not covered by satellites due the inclination of their orbits. The PolarGAP project was therefore designed to fill in the gap in the satellite data coverage of the South Pole and in particular acquire the missing gravity data.

Airborne radar data were also collected to enable mapping of the bedrock topography hidden beneath the ice sheet. The data reveals the topography which controls how quickly ice flows between the East and West Antarctic ice sheets.

The team, led by Northumbria University, has mapped for the first time three vast, subglacial valleys in West Antarctica. These valleys could be important in future as they help to channel the flow of ice from the centre of the continent towards the coast.

If climate change causes the ice sheet to thin, these troughs could increase the speed at which ice flows from the centre of Antarctica to the sea, raising global sea levels.

The largest valley, known as the Foundation Trough, is more than 350km long and 35km wide. Its length is equivalent to the distance from London to Manchester, while its width amounts to more than one and a half times the length of New York’s Manhattan Island.

The two other troughs are equally vast. The Patuxent Trough is more than 300km long and over 15km wide, while the Offset Rift Basin is 150km long and 30km wide. 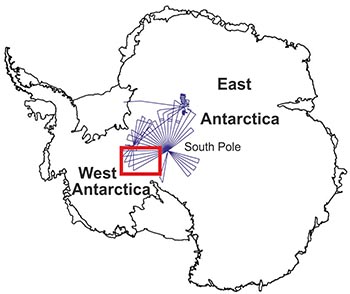 Lead author, Dr Kate Winter, a Vice-Chancellor’s Research Fellow in Northumbria University’s Department of Geography and Environmental Sciences, explains: “As there were gaps in satellite data around the South Pole, no one knew exactly what was there, so we are delighted to be able to release the very first findings to emerge from the PolarGAP project.

“We now understand that the mountainous region is preventing ice from East Antarctica flowing through West Antarctica to the coast. In addition we have also discovered three subglacial valleys in West Antarctica which could be important in the future.

“If the ice sheet thins or retreats, these topographically-controlled corridors could facilitate enhanced flow of ice further inland, and could lead to the West Antarctic ice divide moving. This would, in turn, increase the speed and rate at which ice flows out from the centre of Antarctica to its edges, leading to an increase in global sea levels.”

Dr Winter adds: “The data we have gathered will enable ice sheet modellers to predict what will happen if the ice sheet thins, which will mean we can start to answer the questions we couldn’t answer before.” 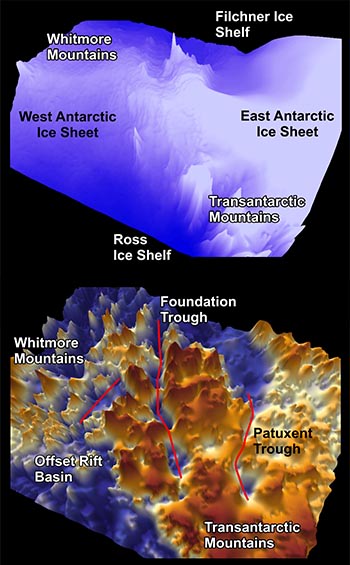 Dr Winter worked with researchers from Newcastle University, British Antarctic Survey, the Technical University of Denmark, the Norwegian Polar Institute and the European Space Agency on the paper, Topographic steering of enhanced ice flow at the bottleneck between East and West Antarctica.

Dr Fausto Ferraccioli, Head of Airborne Geophysics at British Antarctic Survey and the Principal Investigator of the European Space Agency PolarGAP project, explained: “Remarkably the South Pole region is one of the least understood frontiers in the whole of Antarctica.

“By mapping these deep troughs and mountain ranges we have therefore added a key piece of the puzzle to help understand how the East Antarctic Ice Sheet may have responded to past change and how it may do so in the future. Our new aerogeophysical data will also enable new research into the geological processes that created the mountains and basins before the Antarctic ice sheet itself was born.”

Dr Neil Ross, Senior Lecturer in Physical Geography at Newcastle University, added: “Understanding how the East and West Antarctic Ice Sheets interact is fundamental to our understanding of past, present and future global sea level. These new PolarGAP data give us both insights into how the landscape beneath the ice influences present ice flow, and a better understanding of how the parts of the great Antarctic ice sheets near to South Pole can, and cannot, evolve in response to glaciological change around their margins.

“There is a need to follow up the extensive aerogeophysical PolarGAP survey with detailed field investigations and numerical modelling of the glaciological processes operating in this frontier region of Antarctica.”

Northumbria University has a growing reputation for its research into extreme, cold and palaeo environments. Last month the University was awarded £754,000 by the Natural Environment Research Council and the National Science Foundation to undertake two studies examining how and when Antarctica’s massive Thwaites Glacier could collapse.