The special exhibition, launched to commemorating the 50th anniversary of Dr King’s historic visit to Newcastle, opens to the public this week and features a number of unique exhibits.

The handkerchief was originally given to Mrs Edna Kane, who managed the official residence of the Vice-Chancellor of Newcastle University alongside her husband Laurence. It was a thank you from Dr King for the hospitality he received during his stay. Professor Ward, who also uncovered long lost film footage of Dr King’s degree ceremony and speech, located the handkerchief via the Kane’s son Peter, in the course of research for his new book about the civil rights leader’s historic visit.

‘To honour a great and good man’, will tell the inside story of Dr King’s visit to Newcastle to accept an honorary degree in 1967. The exhibition, at Newcastle University’s Philip Robinson library, looks at what led to Dr King’s nomination for an honorary degree, the build up to the visit, and what happened on the day. Featuring unique, archive material that Professor Ward unearthed at Newcastle University and beyond, it also examines the reaction in Newcastle following Dr King’s assassination barely six months later, and the legacy of how his visit to the city has been remembered.

Geraldine Hunwick, Senior Archivist in Newcastle University’s Special Collections team, explained: “The 50th anniversary of Dr King’s honorary degree has given us a unique opportunity to re-visit this remarkable event. His visit took more than a year to plan, leaving us with a wealth of fascinating material.

“Delving into our archives to present the key artefacts connected to Dr King’s visit has been hugely enjoyable, but also thought-provoking, and I hope visitors to the exhibition will reflect on the significance of this momentous occasion.”

Professor Ward, guest curator of the new exhibition, said: “It’s great when historical research supports the kind of creative public engagement that we see in Freedom City 2017 and in this exhibition. It has been a pleasure to work with Geraldine and colleagues at Newcastle to make sure that the public get a chance to see some of the material that I worked with for the book as it helps to explain why King came to Newcastle in 1967 and what happened while he was here.”

The free exhibition opens at Newcastle University’s Philip Robinson library on 7 September and will run until 30 November. Also taking place as part of Freedom City 2017, and coinciding with the exhibition at the Philip Robinson Library, a new book written by Professor Ward will be published later this month looking at Dr King’s visit and telling the largely forgotten history of connections between the region and the civil rights movement.

It shows how Dr King was one of many distinguished African American visitors to the region, including Olaudah Equiano and Frederick Douglass who addressed crowds in Newcastle in the 18th and 19th centuries, and more recently Muhammad Ali and Harry Belafonte.

Professor Ward added: “The book explains the significance of Dr King’s visit both in terms of British and US society in the 1960s and in terms of historic links between the North East and the African American freedom struggle.

“Given that Dr King was not even supposed to speak, it’s wonderful that we can now be inspired by the call he made in Newcastle to confront the global problems of racism, poverty and war. Those words still have tremendous relevance. I am pleased that they are at the heart of the Freedom City 2017 celebrations of Dr King’s visit.”

There will be a launch event for Professor Ward’s new book on 13 September at 6pm at City Library, Newcastle. The event is free but places must be booked. To book a place visit here. To order a copy his new book click here.

For more information about Freedom City 2017, including a list of events taking place, visit www.freedomcity2017.com

Northumbria University has one of the UK’s leading cohorts of American Studies scholars. If you want to learn more about the history, literature, politics, film, art and popular culture of the United States, then American Studies at Northumbria is the ideal choice. The University is recognised for world-leading research across the Humanities. Results from the 2014 Research Excellence Framework saw Northumbria ranked in the top quartile of UK universities. Our researchers have attracted major funding from Research Councils UK as well as the British Academy, Leverhulme Trust and Nuffield Foundation. Northumbria offers a range of courses in the Humanities, including American Studies. To find out more about studying at Northumbria come along to one of our upcoming Open Days on 30 September and 28 October or click here. 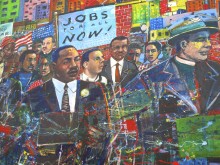 The way in which Black British history and the US civil rights movement are taught in UK schools needs to be updated to include more emphasis on Britain’s racial minorities and imperial past, according to new research.