A fascinating new book about Martin Luther King’s historic visit to Newcastle University will be published next month by Newcastle Libraries’ Tyne Bridge Publishing to coincide with the 50th anniversary of this landmark event.

Martin Luther King in Newcastle by Northumbria University’s Professor in American Studies, Brian Ward, brings alive the historic significance and contemporary relevance of this episode in North East, British and US history.

The book tells the inside story of Dr. King’s visit, explaining why he was invited, the events of the day itself, and why he flew across the Atlantic to spend less than eleven hours in a city that he knew little about at a time of enormous professional strain and personal doubt. The book reveals how Brian discovered film of Dr. King’s ‘lost’ Newcastle speech’ and puts the civil rights leader’s inspiring words into the context of 1960s’ British and US race relations, arguing for their continued relevance and importance in 2017.

Brian’s book also places Dr. King’s visit within another lost history: the link between the African American freedom struggle and the North East. It not only shows how he was one of many distinguished African American visitors to the region, including Olaudah Equiano and Frederick Douglass before him and Muhammad Ali and Harry Belafonte afterwards, but also explains how those connections influenced the development of race relations in the region.

Martin Luther King in Newcastle has already received international praise from a number of sources. Newcastle Central MP Chi Onwurah said: “Brian Ward’s book helps to recover the history of racial, ethnic and religious diversity on Tyneside, along with the region’s many international connections. This important book is as timely as it is compelling.”

John A. Kirk, Professor of History at the University of Arkansas, Little Rock, said: “Brian Ward makes Martin Luther King Jr.'s visit to Newcastle in 1967 the starting point for an impressively authoritative and breathtakingly sweeping examination of the city's and region's engagement with global struggles for freedom and equality over several centuries.

Shaka Hislop, former Newcastle United goalkeeper and supporter of Show Racism the Red Card called it: “A fascinating book about a forgotten slice of Newcastle and American history that has much to tell us about race relations in the 21st century. The continuing importance of the message Martin Luther King brought to Newcastle in 1967 shines through on every page.”

Brian Ward said: “The book explains the significance of King’s visit both in terms of British and US society in the 1960s and in terms of historic links between the North East and the African American freedom struggle. Given that King was not even supposed to speak, it’s wonderful that we can now be inspired by the call he made in Newcastle to confront the global problems of racism, poverty and war. Those words still have tremendous relevance. I am pleased that they are at the heart of the Freedom City 2017 celebrations of King’s visit.”

Northumbria University has one of the UK’s leading cohorts of American Studies scholars. If you want to learn more about the history, literature, politics, film, art and popular culture of the United States, then American Studies at Northumbria is the ideal choice. Whether your interests lie in the Civil War or the Civil Rights Movement, Donald Trump or Donald Duck, Beyoncé or the Bay Area, this course will help you to develop your critical and imaginative skills in the context of the American experience and its global significances.

The University is recognised for world-leading research across the Humanities. Results from the 2014 Research Excellence Framework saw Northumbria ranked in the top quartile of UK universities. Our researchers have attracted major funding from Research Councils UK as well as the British Academy, Leverhulme Trust and Nuffield Foundation. Northumbria offers a range of courses in the Humanities, including American Studies. To find out more go to: northumbria.ac.uk/humanities or come along to one of our upcoming Open Days.

There will be a launch event for Brian’s new book on September 13 at 6pm at City Library, Newcastle. You can book a place here:tiny.cc/MLKBookLaunch

This fascinating new book is available from City Library, Waterstones, online at tiny.cc/tynebooks or by calling 0191 277 4174

Any media enquiries about Brian’s book can be directed to Daniel Thomson, PR and Media Manager at Northumbria University, Newcastle, on 0191 243 7076 or daniel.j.thomson@northumbria.ac.uk. 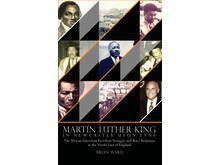