A globetrotting Northumbria University graduate is about to set off on one of his most arduous expeditions yet, paddling almost 1,600 miles down the Ganges river.

Design for Industry graduate Spike Reid has undertaken a number of global expeditions since graduating from Northumbria University and serving as President ofNorthumbria Students’ Union for two years. He has led expeditions to countries including Afghanistan, Kyrgystan, Siberia and Nepal and spent seven months circumnavigating the globe investigating the human impact of climate change.

Adventurous Spike has a passion for stand-up paddle-boarding. He has already paddle-boarded the length of the River Shannon, across the breadth of England, and the entirety Portugal’s Algarve. Earlier this year he was part of the first ever crew to paddleboard around the Caribbean island of Martinique.

He is now seeking support to fund possibly his toughest challenge, in which he will travel to Asia and spend three month’s paddle-boarding down the Ganges – one of the longest river in Asia and one of the most polluted rivers in the world.

Approximately 450 million people – over 6% of the world’s population – live and work alongside the river, which has led to it becoming filled with garbage, sewage and agricultural pollutants and waste. It is estimated that the river absorbs more than a billion gallons of waste each day.

With two team mates, Spike will set off from the source of the Ganges in the Himalayas. They will have to hike 155 miles to the glacial source before paddle-boarding 1,569 miles south east through India and Bangladesh to the Bay of Bengal.

The team will investigate how the levels of human-driven pollution increase as the river flows from the glacial source of the river in the Himalayan mountains through to the densely populated towns and cities of India and Bangladesh.

As well as analysing the pollution and condition of the river, they will also be documenting the impact of pollution and hope to release an educational film next year.

Spike and his team mates Shilpika Gautam and Pascal Dubois are self-funding the £50,000 expedition. They have already raised almost two-thirds of the money needed and are hoping to raise further funds from donations to cover the remaining costs.

Spike explained: “We are undertaking this project to raise awareness for the huge amount of pollution – particularly from single-use plastic – which is disposed of into the Ganges and other waterways around the world.

“The Ganges is one of the world’s most prominent and significant rivers, as well as being a critical pillar of India’s cultural and spiritual identity. It supports a huge proportion of the world’s population and a number of diverse ecosystems.

“However, this river-of-life is now facing an accelerated death due to the immense strain placed on it from human activity and interference. Unsafe water, inadequate sanitation and poor hygiene are a burden for fragile healthcare systems and in India alone, more than 100,000 people die of water-borne diseases annually.

“This is an issue of global relevance and urgency as all this waste and these pollutants end up in our oceans, endangering marine life and eventually finding their way into our bodies through the food chain. Recognising, addressing and taking action against water pollution is essential to life, to human survival and to civilisation itself.”

Facing such polluted waters, Spike and his team mates are at obvious risk of illness themselves. They have been vaccinated against hepatitis, typhoid, tetanus, polio and will are taking a range of antibiotics with them on the expedition to help protect themselves from dysentery.

They are also at risk from the river itself, with white water rapids, strong currents and even attack from the three species of crocodiles living in the river, although Spike jokes: “Luckily only two types will want to eat us. The other type is only interested in fish!”

Spike added: “Although we have raised two thirds of the funding we need for this project, we are still short of where we need to be. Brexit has made our funding goal around 12% higher than initial estimates and we still need £20,000 to cover costs relating to safety and logistics, analysis of the samples we collect and the production and editing of our documentary.

“Every bit of funding we receive will go directly to the project and every single contribution counts.”

Anyone wanting to support Spike and his team mates can do so at www.igg.me/at/gangesSUP 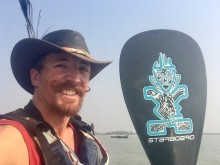 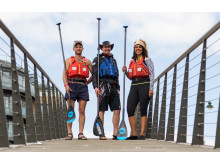