Courtney Stevens and Rosie Sparks have been selected for their responses to a live brief to produce an E-PR campaign and short fashion film, capturing their individual takes on Dr. Martens’ current #STANDFORSOMETHING campaign and reflecting Newcastle’s links to local music and rebellious sub-culture.

Entries for both projects were judged by a panel made up of Dr. Martens’ UK retail marketing team, award winning Newcastle PR agency O PR’s managing director Kari Owers and lecturers from the university.

Rosie’s promotional, three-minute film will be played in the Newcastle Grainger Street store throughout the summer. Meanwhile, Courtney – the winner of the E-PR competition strand – will embark on a sought-after two week work placement with O PR, who handle the PR across Dr. Martens’ UK north stores.

It marks the second partnership between Dr. Martens and Northumbria University in the last 12 months, following a hugely successful brief undertaken by Fashion Design students in autumn 2013 – clothing from which featured in the students’ recent film projects.

Dr. Martens’ UK retail marketing manager Amy Nelson said: “We were really impressed by all of the films but Rosie’s in particular really brought to life #STANDFORSOMETHING on a local level. The result is an inspired piece of high quality film footage which we’re proud to show in store to our North East customers.”

“The industry of public relations is rapidly changing with the growing power of the consumer and rise of social media, so for anyone considering entering the industry it’s essential they have an understanding of innovative digital PR and marketing strategies to access the ever-growing online communities.”

Catherine Glover, Senior Lecturer in BA (Hons) Fashion Communication at Northumbria University, said: “We are delighted that we have been able to engage with a key industry regional partner such as O PR and work on such an exciting brief as creating films and PR strategies for Dr. Martens.”

Winning student Courtney Stevens said: “To have my work recognised by such an iconic and timeless brand is an incredible feeling. I’m looking forward to my work placement, which is an unmissable opportunity to get a taste for what the industry is like.” 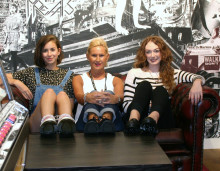 Design students at Northumbria University, Newcastle, have been approached by British fashion label, Dr. Martens, to create a new outfit that sums up the iconic brand. 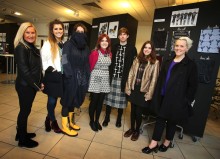 Three students from Northumbria’s School of Design have been announced as winners of a creative design competition from British brand, Dr. Martens, to celebrate the opening of its first standalone store in Newcastle.