No Yes
Rock debris cover on glaciers in the Alaska Range

A new study which provides a global estimate of rock cover on the Earth’s glaciers has revealed that the expanse of rock debris on glaciers, a factor that has been ignored in models of glacier melt and sea level rise, could be significant.

The Northumbria University study, which has been published in Nature Geoscience this week, is the first to manually verify the rock debris cover on every one of the Earth’s glaciers.

As glaciers shrink, their surrounding mountain slopes become exposed and eroded rock debris slides down and accumulates on glacier surfaces. This debris forms a protective layer that can be many metres thick, reducing the rate at which the ice below melts. Although the effects of this protective cover are known, it has never been carefully mapped until now, and so has not been included in global glacier models.

As well as revealing where rock debris is located on Earth’s glaciers, the researchers also found and corrected key errors within the Randolph Glacier Inventory – a global inventory of glacier outlines on which hundreds of studies are based.

The exercise allwed them to analyse the debris cover on a global-, regional-, as well as individual glacier-scale and created the world’s first baseline dataset of glaciers in their current state.

They found more than 29,000 square kilometres of the world’s mountain glacier area is covered in rock debris – an area equivalent to almost 500 Manhattan Islands.

Lead researcher Sam Herreid undertook the study for his PhD at Northumbria University and is now believed to be the only person who has examined every glacier on Earth, manually correcting the Randolph Glacier Inventory and bringing a level of consistency that has never before been present in a global glacier dataset.

He explained: “The structure of the debris cover of each glacier is unique and sensitive to climate, but until now, global glacier models have omitted debris cover from their forecasts of how glaciers respond to a changing climate.

“We now know that debris cover is present on almost half of Earth’s glaciers, with 7.3% of the world’s total mountain glacier area being debris covered.

“When we consider that much of this debris cover is located at the terminus, or toe, of a glacier where melt would usually be at its highest, this percentage becomes particularly important with respect to predicting future water resources and sea level rise.”

The study also uncovered errors within the Randolph Glacier Inventory, finding an error rate of 3.3%. One of their findings revealed that 10,000 square kilometres of mapped glacier area was not actually glacier, but rather bedrock or vegetated ground that was either incorrectly mapped previously or glacier area that has since melted away.

This, combined with the melt reduction from debris insulating the ice below, means that all past global glacier models based on the Inventory are likely to have overestimated the true volume of glacier melt, run off and subsequent contribution to global sea level rise.

They described the 10.6% of glacier area that requires an updated approach to estimating melt as “an alarmingly high number” and said that their work provides a key dataset for revising, and likely lowering, the glacier contribution to sea level rise.

The team also devised a way to analyse how the world’s debris-covered glaciers will evolve over the coming centuries.

By comparing the many states of glaciers present on Earth today, from those considered to be ‘young’ and icy in Greenland, to ‘old’ and rock covered in the Himalaya, they were able to piece together a conceptual timeline which they believe outlines how a glacier might evolve in the future. 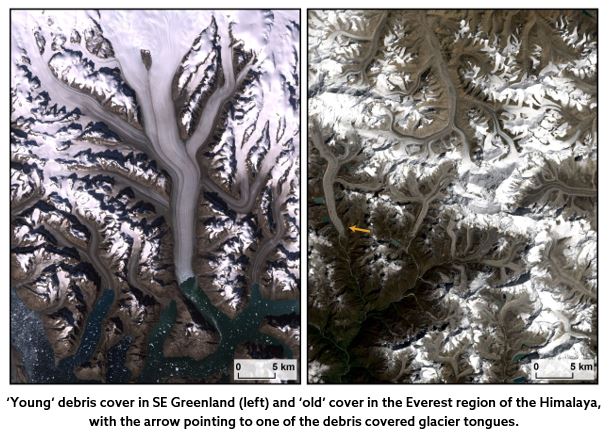 Their timeline reveals that many glaciers are at the older end of the spectrum and can therefore be considered to be on the decline.

Co-author Francesca Pellicciotti of the Swiss Federal Research Institute WSL and an Associate Professor at Northumbria University, explained: “The upper levels of the glaciers are constantly accumulating snow and will always be debris free, so we looked only at the lower levels of glaciers which is where rock debris can accumulate.

“Ice melts and flows away as water, but the rocks do not, and accumulate at the surface. Changes in the rate of mountain erosion as well as glacier changes in a warming climate will affect the size and shape of the rock layer at the surface of a glacier at any one time.

Northumbria University is renowned for being one of the leading centres in Europe for research into cold and palaeo environments. In recent years the University has been granted major research funding to investigate and model changes to Antarctica’s major glaciers. It is the only UK university to be involved in two investigations in the £20 million UK-US International Thwaites Glacier Collaboration.

The study The state of rock debris covering Earth’s glaciers is now available in Nature Geoscience.

A robotic revolution for urban nature

Drones, robots and autonomous systems can transform the natural world in and around cities for people and wildlife.

A Northumbria University academic has won a major international award in recognition of his exceptional scientific contribution to the field of glaciology.