The exhibition, which runs from 7 February until 28 March, has travelled from London, where it was officially opened by the Queen of Norway at the University’s sister gallery, King’s Place, in November. It will enjoy further prestige when it is opened in Newcastle by the Norwegian Ambassador.

Visitors to Opdahl’s earlier exhibitions in both Newcastle and London will recall his disturbing images of the threatening power of nature in his Nordic landscapes. His intense, lyrically-charged work projects the sort of enkindled presence of the elements – earth and fire, wind and water – which is only to be encountered in the Far North.

Although Opdahl’s relationship with his native landscape is experiential (he is an experienced sailor and mountaineer), his pictorial approach to it is meditative and philosophical. Reflecting upon that empty, overwhelming land, his instinct is not to describe or depict it, but to create moods which suggest its latent power.

Strongly influenced by the magnificent coastal land of his native West Norway, his powerfully scaled paintings draw upon influences from both his own Norwegian landscape tradition and the philosophical and spiritual concerns of post-1945 abstract art.

Born in 1944, Opdahl lives and works on the island of Godøy (God’s Island), on the west coast near Ålesund where he was born. Like Wordsworth, who believed that growing up in the Lake District made him a ‘favoured being’, Opdahl, after years of living in Oslo, returned to his home landscape for similar reasons.

The University Gallery is open Monday to Thursday, 10am – 5pm and Friday to Saturday 10am- 4pm. The Gallery is closed Sundays and Bank Holidays. Admission is free. For more information, visit www.universitygallery.co.uk.

A Northumbria art student has won a national award for his nostalgic pencil drawing. 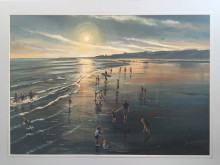