Northumbria University in Newcastle upon Tyne and Taras Shevchenko National University in Kyiv have joined forces to launch the National Centre for Creative Entrepreneurship (NCCE).

The NCCE will be the first centre of its kind in Ukraine, acting as a national hub for aspiring entrepreneurs and supporting new start-up businesses, as well as providing online English language learning tools.

Northumbria University has an international reputation for supporting young entrepreneurs and is ranked number one in the UK for graduate start-up businesses, based upon estimated turnover.

Academics from Northumbria will now share their knowledge and skills with colleagues from Taras Shevchenko National University after their proposal was one of 12 selected to receive funding through the Creative Spark: Higher Education Enterprise Programme.

This will be achieved by partnering universities in the seven countries with higher education institutions in the UK, allowing for the exchange of knowledge and skills.

The Northumbria University project is being led by Professor Rebecca Strachan, Deputy Faculty Pro Vice-Chancellor within Northumbria’s Faculty of Engineering and Environment.

Speaking about the impact the partnership will have she said: “Over the past seven years staff from Northumbria and Taras Shevchenko National University have worked together on a variety of projects and have developed a mutual understanding and respect.

“We understand that providing creative young Ukrainian entrepreneurs with the skills they need to develop their own businesses is a key priority, both for Taras Shevchenko National University and the country of Ukraine as a whole.

“Here at Northumbria we have developed a reputation for supporting budding entrepreneurs and will share what we have learnt with our Ukrainian colleagues to support the establishment of the National Centre for Creative Entrepreneurship – a very exciting development for Ukraine.”

Creative industries are one of the fastest growing sectors in the Ukrainian economy, with estimates that almost one million new jobs could be created within this sector in Ukraine by 2030.

Courses provided through the NCCE will include Leadership Thinking, Entrepreneurial Skills, and Marketing New Businesses. Online English language learning tools will also be provided and an Incubator Hub to support new business will also be created, based on a similar model currently being developed at Northumbria University.

The team from Ukraine will carry out a return visit to Northumbria University at the end of November, during which final details for the launch of the NCCE will be discussed and finalised.

Northumbria staff and students ‘impress’ in the Ukraine

​A team of Northumbria staff and students recently attended a national event in Kiev to mark the culmination of the three-year IMPRESS project. 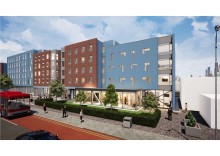 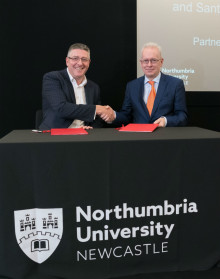 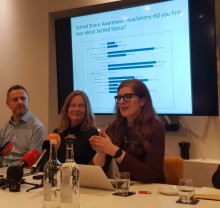 Northumbria students learn to be agile in challenging business environment

​Students at Northumbria University are learning what it means to be agile in an ever-changing marketplace, with support from one of the world’s most renowned business support companies.