A new way to control how liquids dry on surfaces which could bring benefits to a range of industries, has been discovered by researchers from Northumbria University and The Open University.

The findings of the research team have been published today, Wednesday 11 April, by the journal Nature Communications.

Watermarks remain when a droplet dries on a solid surface, for example, when raindrops dry on the surface of a car, or when water dries on a wine glass after washing-up.

The way in which watermarks appear on a surface is uncontrollable because the shape and location of a droplet as it evaporates is unpredictable. This poses limits to many applications, such as inkjet printing, where an ink droplet can leave a distorted shape on paper, and micro-engineering, where watermarks can spoil the performance of delicate microstructures.

However, the researchers from Northumbria University’s Smart Materials and Surfaces Laboratory, and The Open University’s School of Mathematics and Statistics, have found a new way to control the shape and location of drying droplets for the first time, known as ‘snap evaporation’.

When a droplet evaporates on a solid surface, its edge ‘pins’ and ‘depins’ in an uncontrolled manner. This effect occurs due to the microscopic roughness of the bare solid surface. However, the researchers were able to control the way droplets dried, through a combination of wavy solid geometry and an ultra-smooth surface treatment.

Their findings could have an impact on many everyday applications – for example, the motor industry could treat car surfaces differently to minimise watermarks, and the smartphone and computer industry could improve the efficiency of micro-heatpipes, which remove heat from microprocessors.

Dr Gary Wells, Senior Lecturer at Northumbria University, said: “An egg-box is an example of a wavy solid: it has repeating peaks and valleys that form a wavy pattern. We 3D printed such a wavy pattern and covered its rough surface with a thin lubricant layer. The resulting composite surface keeps the wavy shape, but becomes ‘ultra-smooth’.

“When we left water droplets to evaporate on these wavy surfaces, they initially retracted from the solid in a smooth way, as one would expect for a perfectly smooth solid.However, the wavy surface makes the droplets ‘snap’ at specific points, changing their position and shape. This is a new mode of evaporation, which we have named ‘snap evaporation’.

“Remarkably, this process is highly reproducible, and we have found that the actual design of the wavy pattern can control the position and shape of the droplet.”

The reason for the snap behaviour lies in bifurcation theory, a branch of mathematics that studies how a system—in this case the droplet—responds to a change in a control parameter—in this case a reduction of mass due to evaporation.

Dr Marc Pradas, Lecturer at The Open University, explained: “The main idea behind our theory is that the configuration that a droplet takes on a wavy solid pattern is not unique. There are different shapes and positions that the same amount of liquid can occupy on a given wavy pattern.

“During evaporation, the mass of a droplet changes, and it turns out that what was a stable drop shape and position becomes unstable. At this point, which is known as a bifurcation, the droplet must change its shape and position. The wavy surface acts as a steering wheel, guiding the droplet to the next stable configuration after a snap has occurred.”

Dr Rodrigo Ledesma-Aguilar, Associate Professor at Northumbria University, added: “The implications of our study can have an impact in many everyday applications, and we are currently working with industrial partners that can benefit from our research.

“For example, we are working with Jaguar Land Rover to develop new strategies that minimise watermarks on the surfaces of cars. Another example is our collaboration with Sustainable Energy Systems, who can benefit from our results by improving the efficiency of heat-removal systems used in micro-processors such as CPUs and GPUs.”

The full findings of the research can be found in the paper Snap evaporation of droplets on smooth topographies which is published in Nature Communications. Nature Communications is an open access journal that publishes research from all areas of the natural sciences. It states that “papers chosen for publication represent important advances of significance to specialists within each field.”

The Smart Materials and Surfaces Laboratory at Northumbria University is a multidisciplinary group that combines expertise in Mathematics, Physics, Chemistry, Materials Science and Engineering. Members of the group research and design new materials with specific properties, or whose properties can be changed by external forces or interfacial interactions. In recent years, their research has shown how micro- and nano-structured surfaces can shape, repel and transport liquids and how Leidenfrost levitation, acoustic waves and electric fields can manipulate droplets or liquid films.

​A prototype engine based on a solid-to-vapour transformation, which could be used for harvesting energy on the surface of Mars and other extreme environments, is being developed by scientists at Northumbria University. 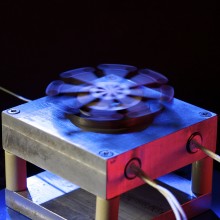 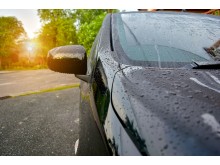 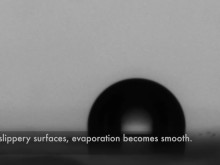 Researchers from Northumbria University's Smart Materials and Surfaces Lab worked with the Open University to find a way to control how l...