The event attracted eager students, aged 11-19, from 40 schools across the region. The emphasis was on interaction and the chance to explore the wide range of careers and opportunities in the field of science, technology, engineering and maths (STEM).

Students took part in over 70 hands-on activities including The Zombie Show, Brain of the Dead, a spoof lecture which lifts the lid on the zombie skull and peers into the brain of the infamous movie character. They were also challenged with problem solving activities, including whether or not the Angel of the North could fly and the chance to build their own space satellites.

Students were also given the opportunity to showcase their projects to a panel of judges who awarded them for their skill and creativity. The best projects were nominated to represent the North East at the Big Bang UK Young Scientists and Engineers Fair at the NEC, Birmingham, in March 2016.

Some of the country’s leading employers including Nissan, HP Enterprise, The Reece Foundation, Accenture and the Royal Air Force (RAF) were on hand to talk to the students about the career opportunities available to them in STEM.

The three-year Think Physics initiative was launched in 2014 to help engage more young people – especially girls and under-represented groups – in STEM subjects from pre-school to university and into their careers.

The project aims to address this over the next three years under the leadership of Dr Carol Davenport, Director of Think Physics, and her team of specialists.

Dr Davenport said: “Once again, Think Physics is delighted to be involved with the Big Bang North East. The day is all about showing young people how interesting, exciting and surprising science can be.

“One of the great benefits of this event is that it highlights some of the many different careers in science, engineering and technology, careers that our visitors might not have realised were science linked.

“As they walk around Northumbria, they will see examples of real world applications of the ideas that they have learnt about in school science. Young people want to make a difference in the world, and one of the aims of the Big Bang, and Think Physics, is to show them that studying physics and maths will let them change their world for the better.”

The Big Bang North East Fair has received welcome backing from Newcastle Central MP Chi Onwurah, an engineer herself, who has often called for more to be done to inspire young people, and particular girls, to get into STEM careers.

She said: “We have a huge skills shortage in engineering and science. Engineering is a great career and too many young people are missing out on it. The country, and in particular, the region needs engineers’ skills and insights to help rebuild our economy. Collaborative working between educators, employers and policymakers is the best way to make sure we can pay our way in the world of the future. We need to be working at all levels to attract more young people in general into engineering and the Big Bang event at Northumbria University is a perfect example of this.”

Yvonne Emerson, Big Bang North East manager, said: “By engaging with local employers to support the event we ensure that the Big Bang North East Fair reflects the STEM skills needs of the area and provides employers with an opportunity to showcase the career pathways available to young people in STEM.”

Northumbria’s students and staff have been awarded for their innovation at this year’s spectacular Maker Faire UK exhibition at the Centre for Life.

Science and innovation in the spotlight

Dinosaur cloning, 3D action dolls created by lasers and robots and bacterial “kiss” portraits are just some of the activities on offer when the world-famous Maker Faire returns to Newcastle.

SCIENCE opens doors to the most incredible careers for young women. 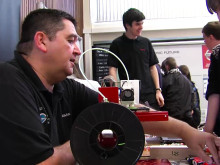 Around 2,000 students from schools across the North East paid a visit to Northumbria University, Newcastle, to take part in one of the la...