Two plays, a variety of drama presentations and script-writing workshops – running from Wednesday 15 to Saturday 18 May – will highlight the work of final year Performance, Performing Arts, Drama, and Drama and Scriptwriting BA Honours students.

This is the first time that the annual final year performance showcases will take place at Northern Stage, marking a closer collaboration between the University and the largest producing theatre company in the North East.

The main performances will be two productions about Europe: The Visit and States of Descent. Written and directed by Northumbria academic Steve Gilroy, States of Descent is a new play about the crisis facing Europe. The play gathers voices from this fragmented continent and demonstrates how far people will go when pushed. The topical script asks the question, ‘with the economic contagion spreading is this the beginning of the end for the European?’

The Visit, written by Friedrich Dϋrrenmatt, explores the poor, hopeless and tired people of a town called Gullen. How will they react if the answer to solving their money woes involved murder? Will their greed for wealth be stronger than their loyalty for a friend? This fast-paced and wickedly funny play is a tale of revenge, manipulation and the ultimate power of money.

The four-days of events will celebrate the year’s most exciting, rigorous and thought-provoking work. Members of the public and industry partners are invited to watch and participate in script-readings, discussions, performances, music and entertainment by Northumbria’s next generation of performers, writers and makers.

For more information about the performances or to buy tickets visit www.northernstage.co.uk or contact the Box Office on 0191 230 5151. 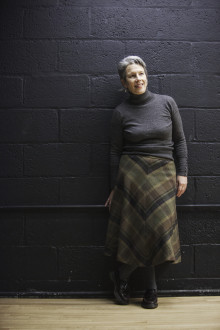 A pioneering participatory arts project, based around a fishing disaster, is currently touring the East Coast. Fiona MacPherson, Senior Lecturer in Performing Arts talks about how the University is involved in Follow the Herring.