Artworks at the Laing Art Gallery in Newcastle and Shipley Art Gallery in Gateshead will be used to give English Literature students a greater understanding of the political and social context of the literature they are studying, as well as increased confidence in reading texts and images.

It is hoped exploring literature in this way will give pupils greater confidence and new skills which will be reflected in their exam results, with greater numbers also deciding to go onto study English Literature at A Level.

The project, entitled Learning through the Art Gallery: Art, Literature and Disciplinarity is being led by Dr Claudine van Hensbergen of Northumbria University and has received more than £235,000 of funding from the Arts and Humanities Research Council.

As Dr van Hensbergen explains: “In the same way that libraries are not just for those studying literature, art galleries are not just for those studying art. Between them the Laing and the Shipley are home to more than 1,800 works of art. These are a fantastic tool for exploring cultural movements such as Romanticism and Modernism, or wider themes such as gender, tragedy and conflict.

“We believe using art in this way will give pupils a greater understanding of the literature they are studying and an insight into what life was like for people at the time a poem or novel was written.”

Dr van Hensbergen, a Senior Lecturer in Eighteenth-Century English Literature, is now working with Anne Fountain, Learning Officer at the Laing and Shipley art galleries, to recruit English Literature teachers from local secondary schools. The teachers will act as ambassadors for the project, advising on which texts students will be studying and informing the development of learning materials.

The project follows a successful pilot in 2017, funded through Arts Council England’s Museum-University Partnership Initiative, during which more than 100 pupils and their teachers attended a series of workshops led by Laing Art Gallery staff, Northumbria academics and students.

As Dr van Hensbergen explains: “Exploring the poem and the painting together allowed pupils to put the poem in context, exploring both the political situation at the time it was written and the wider social context. Being surrounded by other paintings created around the same time added an extra dimension to their understanding of the literature.”

Anne Fountain added: “The results from the pilot were excellent – the pupils involved told us they had greater confidence, skills and ability, and had been introduced to different ways of thinking about literature.

“The teachers were equally as enthusiastic. They told us they welcomed the opportunity to work with students in a new setting and had seen the pupils’ analysis improving throughout the session.

“We hope that these positive benefits will translate into higher grades and the increased engagement of pupils with their studies. Many pupils indicated that as a result of the workshop they were more likely to consider studying English at A Level and beyond.”

Joy Youngman, Assistant Learning Officer at the Laing Art Gallery & Shipley Art Gallery, has been recruited as a Research Assistant for the project.

She said: “This comes at an exciting time when the Laing and Shipley galleries are looking to expand and enhance their previous work with secondary literature students.

“Through the research we are undertaking we hope to demonstrate the positive impact that visual arts can have on students’ confidence and skills, as well as their aspirations to study English Literature beyond GCSE.

“On completion of the project we hope have created a dynamic and practical programme, in consultation with the participating teachers and students, that will be rolled out to support secondary English teachers and their students more widely.”

The Laing Art Gallery and the Shipley Art Gallery are both part of Tyne & Wear Archives & Museums (TWAM), which manages a collection of nine museums and galleries across Tyneside and the Archives for Tyne and Wear.

TWAM is one of 10 organisations chosen by Arts Council England to act as a Bridge organisation, using its experience and expertise to connect children and young people with art and culture.

Many of the children taking part in the pilot project at the Laing Art Gallery last year had never visited the gallery before, despite living locally, but said they were likely to return in the future following the workshop.

The Learning through the Art Gallery: Art, Literature and Disciplinarity project will run for the next two years after receiving £236,682 from the Arts and Humanities Research Council, funded through the Government’s Industrial Strategy Challenge Fund. It aims to engage with pupils and teachers from between 30 and 40 North East secondary schools.

To find out more about the project visit https://learningthroughtheartgallery.wordpress.com/

Fine out more about Northumbria’s Department of Humanities.

One of Newcastle city centre’s most iconic locations is the inspiration behind a new exhibition of work by Northumbria University students, launching next week. 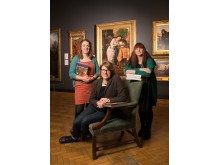