Northumbria University has upheld its reputation as a research-rich institution by retaining an international award for the support it gives to its research staff.

Awarded by the European Commission and managed in the UK by Vitae, the HR Excellence in Research Award is a voluntary initiative which recognises the University’s commitment to improving working conditions and providing career development opportunities for research staff.

The initiative is designed to ensure that Europe is an appealing place for researchers from all over the globe. It also aims to improve the quality, quantity and impact of research output from universities which will in turn benefit UK society and the economy.

The growth of Northumbria’s research profile is evident following its success in the 2014 Research Excellence Framework. Northumbria is now top 50 in the UK for research power and doubled the number of academic staff submitting to REF 2014 compared to the previous assessment, including the submissions of 118 early career researchers. This is supported by a strong commitment to developing research and research careers across the University.

After first receiving the award in January 2013, Northumbria has worked to implement an action plan on measures to improve the support, career pathways and working conditions for researchers . For the two year review, staff submitted a report highlighting the University’s key achievements and progress made to date and an overview of their strategy for the next two year period.

Vitae, an international programme led and managed by the Careers Research and Advisory Centre (CRAC), reviewed Northumbria’s progress over the last two years, the key achievements made to date and the University’s plans for the next two years before announcing that Northumbria had successfully retained its award for a further two years earlier this week. Retaining the award shows the University’s continuing commitment to researchers and and to appointing, developing and retaining the best research staff from all over the world.

“I am absolutely delighted that Northumbria University has retained this award. As demonstrated in the excellent results we achieved in the Research Excellence Framework, the University is becoming an increasingly research-rich institution.

“Researchers play an essential role in the development of the University’s research ambitions, and we are strongly committed to improving their working conditions and career development opportunities. The HR Excellence in Research Award is important because it provides external verification of that commitment. We are looking forward to continuing our progress over the next two years in advance of the four year external evaluation of our award.”

This award is closely linked to the Concordat agreement between Universities UK and Research Councils UK which is designed to support the career development of researchers and which Northumbria committed to in 2012. The University’s Concordat Action Plan is also used to monitor progress and success in achieving both the principles of the UK Concordat and the principles of the European Charter for Researchers.

For more information on the Award and the Northumbria’s commitment to the Concordat to support the career development of researchers, click here.

Northumbria University, Newcastle, has been recognised as one of Europe’s best providers of innovation and entrepreneurship teaching.

Pioneering academic recognised as a global leader in her field

A Northumbria academic has been named the winner of an internationally-renowned award for her outstanding contribution to records and information management. 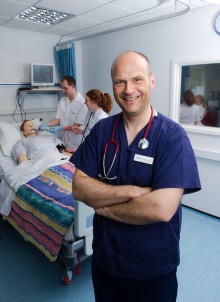 Reward for excellence in teaching and learning

A Northumbria University academic has been awarded a National Teaching Fellowship in recognition of excellent learning and teaching.

Northumbria University has received a major European award recognising its support for the career development of research staff.