Newcastle, Northumbria and Sunderland universities are working together to design and support production of vital protective equipment for the NHS.

The three institutions have designed a visor which can be mass produced, while Newcastle and Northumbria have also combined their 3D printing expertise to make components for splash guard visors.

Newcastle, Northumbria and Sunderland have developed the ‘Hannan snap visor’ which can be produced using die cutting technology rather than laser cutting, which means it can be produced more cost effectively than previous designs.

The design has been made freely available through Open Source Design, so that anyone, anywhere, with the relevant facilities can download it and use it to make the full face visor.

The blueprint for the visor states it is to be manufactured from standard plastics that can be easily sourced. The parts come flat-packed, and can be sterilised then assembled in one to two minutes. The head strap is fully adjustable and gives the user the ability to wear full Personal Protective Equipment (PPE) during use.

Named in honour of Katherine Hannan, a nurse who went out of her way to be at the very front lines of caring for the sick during the Spanish Flu pandemic at the beginning of the last century, the Hannan visor is a low -cost full face visor designed for single sessional use.

The universities have worked with Cramlington-based printing, packaging and direct mail company, Potts Print, and Die Cut Finish in Leeds, to produce visors from the design. It is estimated that up to 2,000 visors an hour could be made using the new design.

The visors will be distributed to local NHS Trusts. Tom Nappey, Research Associate at Open Lab, who led the design of the Hannan visor, said: "We wanted to make sure this vital protective equipment could be produced by anyone, anywhere in the world, so we have worked hard to open source and release this to the public. Die-cutting allows the Hannan Visor to be manufactured at speed and volume and can hopefully support the shortages of PPE both in the UK and internationally.”

Northumbria’s Simon Scott-Harden said: “Taking a product to market can often take years but we managed to design, develop, test and take it into production within a few days, it was a real honour to have had the opportunity to work on such an important piece of equipment that can help so many lives in our communities and beyond.

“The whole team that has worked on the project has been incredible, there has been a real sense of comradeship, everybody has come together for a common cause.”

Roger O’Brien, Head of AMAP at the University of Sunderland, said: “The work on the Hannan visor project with our colleagues at both Newcastle and Northumbria universities, working together virtually, has been a great example of regional collaboration for the benefit of our frontline workers in the NHS.

"Tom has worked tirelessly along with Simon to deliver a clever and innovative design solution, and it has been great to have input into this design by drawing upon the experiences and knowledge we have had from our own Face Shield project, which is now being tooled up as an injection moulded product.

"Sharing experiences and information openly is what makes academic collaborations like this so valuable and effective, and credit is due to all involved, as well as the support and input from NHS colleagues to bring about such a speedy and scalable solution."

Meanwhile, more than 2,000 splash guard visor components have already been donated to Newcastle Hospitals NHS Foundation Trust since Newcastle and Northumbria combined their 3D printing expertise. Between the two institutions, 52 printers previously used across research activity and to support students’ work, are now in use making parts which will be assembled by the NHS and distributed to local hospitals.

At Newcastle, the project began with Nathan Hudson, a technician in the School of Architecture, Planning and Landscape, who began with eight printers, making 40 headbands daily. He came up with the idea following discussions with colleagues and started full-time production after working closely with the local NHS who tested the visor headbands he had made.

“I know people who work in the NHS and they said there was a shortage of personal protective equipment,” explains Nathan. “The University has such close links with the NHS, and with our recent virtually graduated Medical Students going frontline, this seemed like an important duty and a good way to help.

“The project has really made it very real the importance of collaboration to progress efficiently and with agility. Not only are there so many people from Newcastle University involved from what appears to be every department and office (without their skills and knowledge we would not be able to focus as much on production) but it has once again united us with Northumbria University for the common good. It is always a pleasure having the time to engage with the technicians of Northumbria and I hope this strengthens our bond and capacity to collaborate further in the future.”

At Northumbria, Andrew Bellamy, Engineering and Environment Faculty Business Manager, is coordinating the work of a team of technicians who are printing up to 100 headbands every day on the lab’s 25 3D printers.

“When we became aware of the work being carried out by Newcastle we got involved straight away to maximise the impact of the project. Our team of technicians reacted immediately to produce the first batch of headbands. It’s great to hear that the finished products have been warmly welcomed by clinicians within the NHS as they continue to fight against COVID-19”, says Andrew.

Newcastle University is now also acting as a hub for the collection and distribution of components and in a further effort to ramp up production of the PPE components, staff at the School of Architecture, Planning and Landscape also designed a mould of the headband components they are 3D printing. This means local firms can make them with injection moulding. So far, 5,000 have been made using this technique.

Northumbria is a research-rich, business-focused, professional university with a global reputation for academic excellence. Find out more about us at www.northumbria.ac.uk --- Please contact our Media and Communications team at media.communications@northumbria.ac.uk or call +44 (0)191 227 4604 with any media enquiries or interview requests. 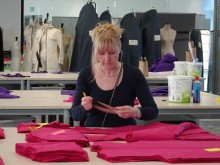 Thousands of much needed clinical gowns and scrubs are being produced by a team of volunteers at Northumbria University’s School of Design, for use by NHS staff across the North East. 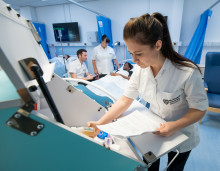 The first students to graduate from the UK’s first ever Registered Nurse Degree Apprenticeship scheme have joined the frontline at Newcastle Hospitals in the midst of the global pandemic.

EXPERT COMMENT: Does design thinking hold the key to business growth during COVID-19

With the IMF warning that the ‘Great Lockdown’ global recession will be the worst since the Great Depression, organisations are being forced to reset and reinvent faster than ever before. The race is on for entrepreneurs and business owners to craft new plans, develop new products and deliver new solutions in order to survive. 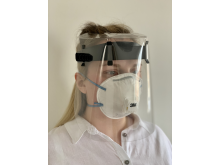 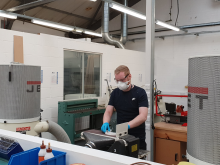 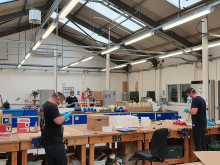 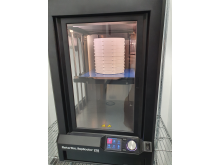