A Northumbria University graduate donned his running shoes for an epic challenge which saw him run races in every Olympic city around the world over the past four years.

Michael Long has taken part in 23 sporting events in every host Olympic city, starting with Athens, Greece. This month marked the 35-year-old’s final race in Rio, Brazil, where the 2016 Games will also be taking place.

Michael, who lives in London, came up with the first-of-its-kind challenge four years ago after the London 2012 Olympics. Previously he had completed the Great North Run (in 2006) in a “slow” time by the Travel and Tourism Management graduate’s standards.

“It took me two hours and 17 minutes to complete the Great North Run,” said Michael. “I didn’t really go running when I was younger – I was a swimmer and a hockey player. But I quickly caught the running bug and entered a marathon in Athens, where I was born. After that I received a book about the Olympic Games, starting with the first Games’ revival which took place in Athens in 1896.

“Because I was so in to running and travelling at the time, a friend of mine said that he wouldn’t be surprised if I’d already run a race at every city that has hosted an Olympic Games. So I took a friend’s advice and spent the next four years doing just that.”

Michael, who now manages the Hotels.com affiliate programme across Europe, has been juggling his marathon challenge with working full-time, and has even managed to squeeze races into weekend-long trips.

He said: “I’ve taken my time as holiday and where possible, when racing in Europe, I’ve flown out on the Friday night, registered on Saturday, run the race on Sunday and flown back Sunday night in time for work the next day.”

After graduating from Northumbria University in 2002, Michael worked at Stansted Airport and Olympic Holidays before landing a job with online travel giants, Expedia, which owns Hotels.com.

“I recommend Northumbria as a place to study all the time,” he said. “I know a lot of people after they’ve graduated say, given their time again, they’d choose another degree, but I have no regrets. The Travel and Tourism Management degree at Northumbria was brilliant, especially the placement year where I worked at the Civil Aviation Authority. It gave me a fantastic overview of so many organisations in tourism, and as a result I’ve always been able to follow my chosen career path.”

To keep track of Michael’s Olympic marathon challenge, follow his blog at http://runalltheolympics.blogspot.co.uk/

Northumbria is ranked seventh in the UK for the number of graduates in professional employment on permanent contracts and 94% of students are in work or further study six months after graduation.

A race expert from Northumbria University, Newcastle will discuss the constantly changing face of race and racism in a special journal edition launched this month. 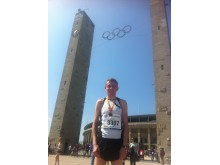