The piece is entitled Ten to Ten in reference to a church situated within the boundary of the ghetto, the clock of which was stuck at ten to ten between 1940, when the ghetto was established, and its closure in 1944.

The performance will feature three songs, performed by The Jewish Choir CLIL at sites across the former ghetto, in which around 43,800 people are thought to have died during the Second World War.

Northumbria University’s Associate Professor of Drama Jane Arnfield, who is also a Leverhulme Trust International Academic Fellow within the Institute of Sociology at the University of Łódź, was commissioned to create the piece by the Marek Edelman Dialogue Centre in Łódź.

The performance is part of a programme of commemorative events taking place between 25 August and 1 September, marking the 75th anniversary of the closure of the notorious Litzmanstadtt Ghetto, also referred to as Łódź Ghetto.

In creating Ten to Ten, Jane took inspiration from The Tree of Life trilogy of books, written by Chava Rosenfarb, who lived in the ghetto during the war, with the lyrics for one of the three songs, Chapter Ten, taken from the third book in the trilogy.

Lyrics for another of the songs, The Earnest Truth, were written by patients at the MONAR rehabilitation centre in Łódź, recovering from drug, alcohol and gaming addiction, who Jane has worked with during her fellowship.

The third song is based on the poem A Song on the End of the World by Polish-American poet Czeslaw Milosz, who survived the German occupation of Warsaw during the Second World War.

The three songs will be performed at 9.50am and 9.50pm at several locations throughout Łódź between Tuesday 27 and Saturday 31 August as part of the city’s commemoration events.

Jane commissioned composer Katie Doherty to work with her to create Ten to Ten, along with Magdalena Szymańska, conductor of the CLIL Jewish Choir.

Printmaking expert Alfons Bytautas, also from Northumbria University, has collaborated with Jane on the project too, jointly designing and producing a series of print banners which will be displayed during each performance. Before that they are due to form part of a printmaking exhibition, taking place at the Vane contemporary art gallery in Newcastle upon Tyne next month.

Produced in the Fine Art Print Studio at Northumbria, the banners are cyanotypes (blueprint) on cotton calico. Cyanotype is an early 19th century photographic process, later used for producing architectural and engineering plans.

It has been a busy few months for Jane – she has recently returned from Phnom Penh in Cambodia, where she took part in the International Association of Genocide Scholars Conference,marking the 40th Anniversary of the fall of the Khmer Rouge.

During her time there Jane performed her award-winning play The Tin Ring – a stage adaptation of Holocaust survivor Zdenka Fantlová’s book of the same name which has toured to over 14 countries and played to thousands of people.

Find out more about the events taking place as part of the 75th Anniversary of the Liquidation of the Litzmannstadt Ghetto – click here.

Jane is a member of Northumbia University's Centre for International Development and Department of Arts.

International development experts from across the world gathered in Newcastle upon Tyne this week for the fourth annual Global Challenges Summit. 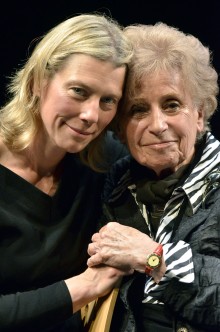 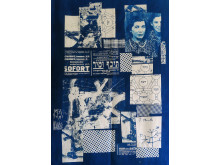 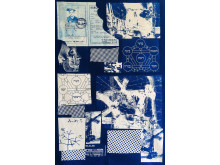