The latest edition of the influential journal Town & Country Planning; the journal of the Town and Country Planning Association, has been edited by a leading environmental expert from Northumbria University, Newcastle.

Alister Scott, a Professor of Environmental Geography, was invited to guest edit the May edition of the magazine as part of his Natural and Environmental Research Council (NERC) funded research into how to encourage planners to incorporate green spaces and infrastructure into towns and communities.

Green infrastructure describes the critical network of green spaces and environmental features vital to the sustainability and economic development of any urban area. These include community parks and gardens, informal recreation spaces, river and canal banks, domestic gardens and allotments. These spaces are known to provide multiple benefits, such as improving air quality, biodiversity, health and wellbeing and helping to mitigate climate change, amongst others.

In 2017, Professor Scott was awarded a prestigious Knowledge Exchange Fellowship worth £226,000 by NERC to undertake research that would lead to a change in the way that green infrastructure is viewed, valued, used and delivered in city planning.

Professor Scott was asked to guest edit the publication to highlight the imperative of improving the mainstreaming of green infrastructure in the planning system and co-authored an article criticising current planning policy.

“For green infrastructure, this means securing improved traction and subsequent adoption in the business, housing, growth, health and community sectors, for example, where the planning system is a key driver. This necessarily involves a cyclical process of knowledge generation, communication, persuasion, acceptance and reinforcement before mainstreaming can be said to have been effected.

“However, green infrastructure is not yet mainstreamed in the planning system as it remains rooted in the persuasion phase. We still see research and policy investigations presenting evidence of the value and multiple benefits of green infrastructure for mental health and wellbeing, the economy, climate change mitigation and biodiversity; but often in separate claims.”

Professor Scott has found that despite much evidence from the research councils that green infrastructure is delivering on all these aspects, there remains widespread resistance to making things happen on the ground.

“There is a need for a change in culture in which everyone gets out of their disciplinary and sectoral silos and embraces more unifying concepts such as place-making, place-keeping and multiple benefits, while being mindful of the risks of fetishising green infrastructure itself within its own silo.”

Professor Scott’s editorial in the latest edition of Town & Country Planning can be viewed online here. The full edition of the magazine is available via open access. 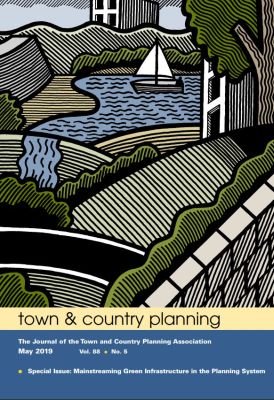 Professor Scott is a member of Northumbria University’s Department of Geography and Environmental Sciences. His NERC Fellowship is enabling him to work with academics, key policy and decision makers to share and translate existing research. His intention is to help both them and wider publics appreciate how to use the latest science and evidence about the role of green infrastructure to improve planning outcomes.

He gives regular updates on his NERC work through his website www.mainstreaminggreeninfrastructure.com

​Alister Scott, Professor of Environmental Geography and an expert in urban planning and infrastructure at Northumbria University, writes for The Conversation on proposals to change the UK's planning system.

One of the key topics of discussion at COP26 is on how we can work with nature to improve our responses to the climate emergency. ﻿﻿ As part of our coverage of climate related research undertaken by Northumbria University, we asked Alister Scott, Professor in Environmental Geography, to share his views on the six lessons that governments and decision makers can take from his research.

North of Tyne back scientists in green revolution

The North of Tyne Combined Authority is backing the scientists of the future with plans to boost green technology and manufacturing in Newcastle, North Tyneside and Northumberland.

With concerns about climate change and urban air pollution high on the agenda for cities around the world, most are now actively looking at ways to reduce their carbon emissions.

Academics in search of solutions to creating more energy efficient phones and television screens now have high-performance machinery at their fingertips, after Northumbria University has invested in a suite of new state-of-the-art equipment to push its leading-edge research forward.