The call for applications was launched at the University’s Media Gala at Tyneside Cinema on Monday 8 June 2015 where films from Northumbria’s final year Media Production students premiered for the first time to friends, family and industry professionals.

An awards ceremony at the Media Gala highlighted the talent on show with Ellen Pickering’s Below the Surface presented with the award for Best Film by the writer-director of Michael Caine’s Harry Brown, Gary Young, and l-l Elenium, by final year student Kristina Leikaite, also picking up a Storytelling Award on the night.

The event marked the start of the search for a graduate from a creative discipline to take up the residency, which was launched last year following the partnership between Northumbria and Tyneside Cinema. The scheme is designed to provide emerging artists with space, technical support and curatorial critique in the professional working environment of the Tyneside Cinema. To be eligible applicants must have achieved a BA, MA or PhD qualification within the last 24 months.

Northumbria University Media Production graduate Callum Costello recently completed the first residency at Tyneside Cinema and left with a body of impressive work which resulted in a job offer from The Calltime Company in Holborn near Brighton. Tyneside Cinema’s film production company - Northern Stars produced a short film documenting Callum’s journey on the programme, which can be viewed here: https://vimeo.com/118690684

The 12-week position is a rare opportunity for an arts graduate to create their own work in the setting of the prestigious cinema and exhibit in The Gallery, a multi-functional art space and intimate 33-seat cinema in 2016. The successful applicant will be based at the independent cinema from October 2015 to January 2016.

When asked about his experience as the partnership’s first artist in residence in 2014, Northumbria graduate, Callum Costello, said: “My residency at Tyneside has given me the chance to develop skills and my style in a professional environment. It’s a privilege to have been the first and I hope my successor makes the most of the unique opportunity.”

The successful graduate will receive a host of benefits during their residency including the use of a large rent-free studio space with unrestricted access to video editing and post production facilities as well as a bursary of £4,600 towards living expenses and production costs as well and free cinema tickets during the programme. In addition to this, they will be mentored by Elisabetta Fabrizi, Tyneside Cinema’s Curator of Screen-based Media and Northumbria’s expert academics, who will support them with advice on creative practice, networking and market understanding.

Robert Jefferson, Programme Leader for Media and Communication Design said: “I would encourage graduates with an interest in animation and cinema to get their applications in for this. This partnership programme has been a great launch pad for Callum’s career and there are lots of talented final year students who exhibited at the Media Gala who are perfect for this post.”

Andrea Macdonald, Artistic Programme Producer at Tyneside Cinema said: “This programme is designed to give talented graduates the chance to develop further in the context of our award-winning art house cinema. We’re proud of what Callum has achieved and will keep an eye on what he produces next but now we are looking for our next artist in residence and have the hard task of choosing who to give it to. The quality of submissions was high last year and I expect it will be the same this summer.”

The Graduate Artist in Residence 2015 call out and application is available on the Tyneside Cinema websitehttps://www.tynesidecinema.co.uk/whats-on/art/artists-in-residence-northumbria-2015 and is welcoming single and joint proposals, applications must be sent to andrea.macdonald@tynesidecinema.co.uk by 31 July 2015 (5pm) to be considered.

Anyone wanting to find out more about how to launch their creative career at Northumbria can sign up for the University’s open days on 26 and 27 June by visiting www.northumbria.ac.uk/openday 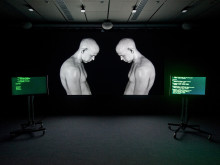