A unique app which allows you to peel back the layers of a masterpiece and uncover a previously hidden world has been developed by experts from Northumbria and Newcastle universities.

The ‘Repentir’ smart phone and tablet app has been designed to enhance the gallery experience, allowing visitors the opportunity to not just view the painting but also interact with it and explore the artist’s creative process.

Featuring the latest work by internationally-acclaimed artist Nathan Walsh – ‘Transamerica’ – the app allows the user to rub away the layers of the painting to reveal the multiple hidden stages right back to the first pencil lines.

Developed by Dr Jonathan Hook of Newcastle University’s Culture Lab and Dr Jo Briggs of Northumbria University, Repentir – along with the finished painting Transamerica - was unveiled at the 2013 ACM Conference on Human Factors in Computing in Paris on April 27.

Project lead Professor Mark Blythe, a designer working in the field of human-computer interaction at Northumbria University, said: “In the digital age there is no ‘original’ or ‘limited edition’ anymore. The changes in the music industry have shown that you can’t limit digital files. Therefore we need new approaches to making digital originals.

“Nathan’s art is in a hyper-real style and many people find it hard to believe that he starts each work from a free-hand drawing. The idea is this technology enhances the artwork as it allows gallery visitors to explore the skilful and complex creative processes that went into creating it.

“Picasso once remarked that the problem with any painting is that eventually it is hung on a wall and nobody ever looks at it again. It may be that new forms of reproduction – such as Repentir – will open up new ways of looking.”

Repentir – which is an artistic reference to the changes or corrections an artist makes to their work – was developed using a high resolution digital camera which was installed in the York-based studio of the contemporary British realist painter Walsh.

The camera captured a daily image of the canvas as his most recent work ‘Transamerica’ developed over a four-month period. The team then created an app that uses computer vision algorithms to recognise the painting in photographs taken from various perspectives and then overlay those photographs with the images captured in the artist’s studio.

Jo Briggs, lead researcher at Northumbria University, said: “We’ve been working with Nathan for over a year and, in that time, were struck by the sheer effort and time he invests in each painting. We wanted to expose and celebrate this in a new digital artefact.”

Repentir was inspired by the idea of “slow technology”, which is a reaction against the speed and ease of digitisation.

“This app means that you’re not limited to just looking at the art, you can touch it and explore it,” explained Dr Jonathan Hook, a researcher in human-computer interaction based at Newcastle University.

“Repentir uses ‘scale invariant feature matching’ to find the position of the painting within a photograph taken on a gallery visitor’s mobile device and augment it with images taken during the different stages of the artist’s creative process.

“It works by picking out prominent features of the original painting, such as corners of buildings, and then looking for the same features in the image taken by the mobile device. The process works even if only a small area of the painting is photographed, even if this is at an angle, allowing gallery visitors to get up close to the painting and inspect particular regions.

“Because every visitor will capture the image from a slightly different angle, rub away the layers in a different way and focus in on different points, it means everyone’s appreciation of the piece will be totally unique.”

People viewing the painting simply need to download the free app onto their smart phones or tablet computer then take a photograph of the original artwork or a print of it. Repentir is then able to precisely overlay the sequence of images captured by the artist.

Each step of the drawing and painting process can then be explored layer by layer by scrolling through the full sequence of images or, alternatively, ‘rubbing out’ areas of each successive layer of the painting using a finger against the mobile screen to reveal the under-layers right back to the original pencil drawing and blank canvas.

The new app has been created in response to the profound challenges that the easy copying and sharing of digital files pose to the creative industries. The researchers sought to explore alternative models for the dissemination of digital content to add value to digital art.

Nathan Walsh, who is famed for his photorealistic cityscapes, does not feel exposed by revealing his drawing process to the viewing public.

On the contrary, he said: “Repentir shows how I construct every element of my paintings from scratch,” he said. “I’m quite happy to promote my original drawings as it demonstrates the fact that drawing is at the heart of what I do.

“The app allows people to get a feel for my journey through making this work. It gives an indication of my methodology and the honesty of my creative process.”

The research team hopes to incorporate more of Nathan’s current and future artwork in Repentir and also plans to develop apps with other painters to expand the range of paintings that the app is able to deconstruct.

Transamerica will be on display in Paris until May 2 before it will be exhibited in New York at the Bernarducci Meisel Gallery.

Recent media reports about the use and exploitation of personal data have increased public awareness of the benefits and drawbacks of sharing information online. 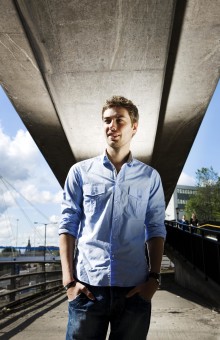 Building experts from Northumbria University, Newcastle, have used the latest in 3D laser scanning technology on a 900-year-old room at Durham Cathedral featured in the Harry Potter films. 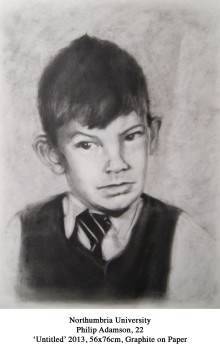 A Northumbria art student has won a national award for his nostalgic pencil drawing.