The news that Helen Marten won the 2016 Turner Prize this week was met with great and well deserved acclaim. Established by a group called the Patrons of New Art in 1984 and now in its 32nd year, the Turner Prize is exactly one year older than the winning artist herself.

It was set up to encourage and promote a wider interest in contemporary art throughout the UK, which it certainly has achieved, but today commentary is frequently disparaging – it has been called “boring”, “irrelevant” and “lumbering” in recent years.

As such, it was refreshing this year not only to encounter the breadth and ingenuity of Marten’s work but to hear, in her acceptance speech, of her distaste for “hierarchical” art prizes and her pledge to share the prize money with her fellow nominees. She revealed a sense of something progressive and pioneering.

I’m a practising artist, who was nominated for the prize in collaboration with my twin sister Jane in 1999. And like Helen Marten, we also had our first solo museum show at The Serpentine Gallery around the same time. We were nominated alongside fellow artists Tracey Emin, Steve McQueen and Steven Pippin. That year, the much acclaimed Oscar-winning director and video artist Steve McQueen won. This was a period in which the Turner attracted much less negativity in the press. So it’s interesting to reflect, 17 years on, on what kind of impact the prize has had on the wider British contemporary art scene.

What is certain is that the prize has been very successful in its mission statement of promoting and widening access to contemporary art. The Turner is still considered by many to be the benchmark of success for artists both nationally and internationally. Its format has been copied, adopted, modified and embraced internationally – from the Vincent Award in Amsterdam and the Hugo Boss Prize in New York to the Duchamp Prize in Paris and the Abraaj Capital Art Prize in the UAE.

The prize continues to thrive and without its impact we might well have been facing an even more serious threat to the vision for the arts in education, which is currently struggling enough – as evidenced in the Department of Education’s adoption of the EBacc system, whereby all creative subjects including GCSE Art are no longer seen as essential to the secondary school curriculum. Without the Turner, I believe there would have been a real possibility of an incurable challenge to the diversity and potential for the creative industries in the UK.

But following the Turner’s example, art prizes have blossomed in the UK in recent years. There’s the International Artes Mundi Prize in Cardiff, the Hepworth Prize for Sculpture in Wakefield, John Moores Painting Prize in Liverpool and – open to all UK undergraduates – the Woon Foundation Prize in Newcastle.

Art prizes are everywhere, it would seem, but there are some that are now starting to shift away from the familiar hierarchical format of the Turner Prize in pioneering and timely new ways.

In March this year, The Freelands Foundation announced a new award worth £100,000 for women artists, who are still dismally underrepresented within the art world. The award is the first of its kind to challenge this hierarchy by supporting a regional arts organisation to present an exhibition alongside realising a significant new work by a mid-career female artist living and working in the UK.

And last month, BALTIC Centre of Contemporary Art, Gateshead – the first venue outside of London to host the Turner Prize in 2012 – launched its own New Artists Award to be given to four emerging artists. This will be the first UK award ever to be selected solely by artists. Each recipient will receive the same amount as the Turner Prize winner – £25,000 – to create a new work that will be exhibited at BALTIC for 13 weeks, along with a £5,000 fee.

The legacy of The Turner prize is to continually recalibrate, revise and transform conceptions of contemporary art. The UK art world has changed immeasurably since 1984 and it is now a global enterprise. Yet it is a powerful testament to the strength and resilience of the creative industries in the regions that we have as many contemporary art galleries, art museums, artist-led organisations and arts-based education and research projects in colleges and universities.

And this message is only getting stronger. At the opening of the new Tate Modern earlier this year, the introduction of the new Tate Exchange initiative was announced, placing art education and access for all at the heart of the UK’s foremost public contemporary art museum – and creator of the Turner Prize.

​A Northumbria Fine Art student has helped organised collaborative art exhibition that brings together work from the city’s two universities.’ 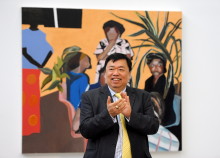