Taking the stage in the White House’s East Room, Trump ranted and raved. The press were unfair, misreporting or ignoring all the successes of his first glorious month. Every day “failing” newspapers run headlines about the growing list of crises that bedevil the administration, which in fact is “running like a fine-tuned machine”.

There was no room for any other reality. Swimming against the tide, ABC’s Jonathan Karl rose up to ask the president “to clarify this very important point”.

"Can you say definitively that nobody on your campaign had any contacts with the Russians during the campaign? And on the leaks, is it fake news or are these real leaks?“

Trump turned his head from side to side, squinted, and frowned.

It was like watching a snake eat itself. The circuitous sentences and close-looped, vague arguments sounded like a nightmare version of Donald Rumsfeld’s accidental Zen poetry: “There are known knowns. There are things we know we know.” But nonsense though it is, this all plays wonderfully to Trump’s base. The president is stoking red-hot antipathy to the mainstream media for his own ends, and it seems to be working.

A September 2016 Gallup Poll showed that only 14% of self-identified Republicans surveyed thought the mass media was trustworthy, as opposed to 51% of Democrats. This wasn’t always the case; in 2002, 49% of Republicans trusted the mass media. Some of Trump’s predecessors would have been relieved to see those numbers – and none more so than the ignominious Richard Nixon.

Like Trump, Nixon also suffered mightily at the hands of the “unfair” and “biased” press. They were out to get him; editors and journalists, he huffed, were just like those snooty Harvard-educated elites who would never really accept his kind.

Nixon’s first vice president, Spiro Agnew, was happy to be the chief executive’s attack dog. Speaking to a gathering of California Republicans on September 11, 1970, he said of the media:

In the United States today, we have more than our share of the nattering nabobs of negativism. They have formed their own 4-H Club – the hopeless, hysterical hypochondriacs of history.

Beset by the nattering nabobs and other traitors, Nixon went so far as to create an enemies list, tallying up all the celebrities, politicians and journalists who had it in for him. The list included 56 television reporters, newspaper columnists, and others; the New York Times, Washington Post, NBC and CBS were all well represented. At the top was the syndicated columnist Jack Anderson. Nixon’s conspirators, among them former FBI and CIA agents, actually considered putting LSD on Anderson’s steering wheel or spiking one of his drinks with an undetectable poison.

Thanks to the Nixon White House’s infamous taping system, the extent of the president’s hostility to the press is recorded for posterity, the president railing against the press and liberal Hollywood in repeated anti-Semitic tirades. 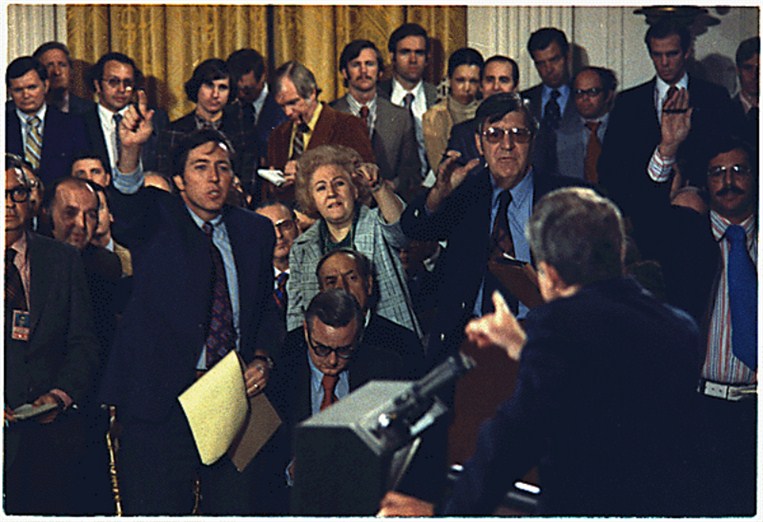 Nixon under attack in October 1973.Wikimedia Commons/Office of Presidential Libraries

In 1971, when military analyst Daniel Ellsberg leaked parts of a 7,000-page document on America’s long involvement in Vietnam and the New York Times published excerpts, the Nixon administration tried and failed to stop them. Nixon was incensed that the New York Times and the Washington Post moved forward with publishing the classified materials. The president railed against Ellsberg, telling Henry Kissinger, “Let’s get that son-of-a-bitch in jail.”

When all else failed, Nixon’s henchmen, “the plumbers”, broke into the office of Ellsberg’s psychiatrist, hoping to find something to discredit him. It didn’t work – and then Watergate came along to bring Nixon’s empire crashing down.

Like all power-hungry authoritarians, Nixon could not and Trump cannot put up with any significant political challenge. Enemies are to be shamed, called names and shouted down. Nixon was incredibly thin-skinned and could nurse a grudge in Shakespearean fashion; Trump, judging from his press conferences and campaign performances, needs to be adored and revered without challenge or impediment.

This can produce whiplash-inducing contradictions. Halfway through the chaotic 77-minute press conferenc, Trump attempted to ingratiate himself with the crowd, hungry as ever for acceptance: “I’m really not a bad person, by the way,” he said – this just days after, Stephen Miller, one of his senior advisors, declared that the president’s executive orders “will not be questioned”.

Bard College professor Ian Buruma recently spoke about the “road to dictatorship”. Authoritarian “movements usually pretend to represent the people,” said Buruma, “as though the people speak with one voice and all those who disagree are not really part of the people.” Then, as if on cue, in a post-presser tweet, Trump wrote:

"The FAKE NEWS media (failing @nytimes, @NBCNews, @ABC, @CBS, @CNN) is not my enemy, it is the enemy of the American People!"

Who can hear this and not immediately think of the First Amendment: “Congress shall make no law … abridging the freedom of speech, or of the press”? Just as in the age of Nixon and his “imperial presidency”, so too in Trump’s Bronze Age: Americans – and the world – need a strong and unfettered press. We need reporters who will call out corruption when they see it, challenge brazen lies when they hear them, and engage the public in the important work of democratic citizenship.