Randall Stephens, Reader in History and Programme Leader in American Studies at Northumbria University, comments on the Republican Party for The Conversation.

Former Florida governor and Republican presidential candidate Jeb Bush must be wondering what on earth is happening. Wasn’t this a sure thing? Is it all a bad dream? If he clicks the heels of his wingtip shoes together three times and says “frontrunner”, will things go back to how they were supposed to be?

Conservative columnist Jason Russell forecast a Bush win as recently as June 2015: “Given what we know now, I predict that Bush will become the 45th president of the United States”. Stranger things have happened – and it’s still in the realm of possibility. But right now Bush is playing catch-up to a couple of strong outsider candidates and one newbie – and obituaries for his campaign are already being written.

His long-predicted rally in the polls has simply never happened. A New York Times/CBS News survey issued on October 27 showed retired neurosurgeon Ben Carson in the lead with 26% of Republican voters; Donald Trump came in second at 22%. Bush didn’t even make it to the third slot, held by Florida senator, Marco Rubio, with 8%, instead tying for fourth with former HP CEO Carly Fiorina on 7%.

It wasn’t all good news for Carson. The poll also revealed “that Mr Trump’s supporters are firmer in their support than Mr Carson’s. A majority of Trump supporters, 55%, said their minds were made up. But 80% of Carson backers said it was too early to say for sure that they would eventually support him.”

Still, it’s obvious the active base of the party has little to no interest in the establishment candidates – and is even outright hostile to them.

This has been driving Bush to distraction lately. During an October 25 town hall meeting in Charleston, South Carolina, he lashed out:

"If this election is about how we’re going to fight to get nothing done, then I don’t want to have any part of it … I got a lot of really cool things I could do other than sit around and be miserable, listening to people demonise me and feeling compelled to demonise me. That is a joke. Elect Trump if you want that."

That mix of contempt and self-pity smacks of an entitled sore loser, and it won’t win anyone over. The conservative base has shown again and again that it prefers the regular guy, a part played in the home stretch of 2008 by Joe the Plumber. In the 2000 election, Jeb’s brother George W. was able to play this role in spite of his presidential pedigree; Sam Adams and Roper Starch conducted a poll that revealed (surprise!) that more Americans would like to sit down and drink a beer with Bush than his rival, the buttoned-down, robotic Democrat, Al Gore.

The hard right’s preference for the unvarnished authenticity of a non-politician is especially strong in this year’s campaign, but it’s not a new phenomenon. In 1837, the New England literary giant Ralph Waldo Emerson observed that: “The mind of this country, taught to aim at low objects, eats upon itself.” Being unlettered or uninformed in the world of politics or church life is not a liability. Sometimes it’s even an asset.

A recent poll by AP-GfK reveals that “an overwhelming 77% to 22% margin, Republican registered voters say they prefer an outsider candidate who will change how things are done, rather than someone with experience in Washington who can get things done.” These voters also want “someone with private-sector leadership experience over experience holding elected office, 76% to 22%.” You can almost hear a thud as party chairman Reince Priebus faints and falls to the ground.

This fondness for the newbie, the rookie who would shake things up was already front and centre when Sarah Palin was named John McCain’s running mate in 2008. Palin spat in the face of Washington figures, education experts, climate scientists, biologists, and healthcare specialists – and she has continued doing so long after she and McCain were defeated.

At a 2010 Tea Party convention she took aim at Obama and his law degree, shouting out to the crowded room: “We need a commander-in-chief not a professor of law standing at the lectern!“ And at the start of 2015, she was roundly mocked for a rambling, semi-improvised speechwhere she advised "GOP leaders” that: “The man can only ride you when your back is bent!”

Trump is mining the same rich vein as Palin when he blasts all those eggheads who seem to think they know more than the average man or woman on the street. Maybe vaccines do cause autism, Trump suggested in the September debate. His freewheeling Twitter presence offers more where that came from:

Trump, Carson and their ilk dismiss or mock the politics and theories of “elites” and decry their critics as propagandists. The “liberal media” canard worked well for Senator Ted Cruz, who rebuked his CNBC hosts: “Let me say something at the outset. The questions that have been asked so far in this debate illustrate why the American people don’t trust the media.” The crowd roared with approval. Critical questions asked by the CNBC crew were met with loud boos and hisses. “I know the Democrats have the ultimate SuperPac,” said Rubio. “It’s called the mainstream media.”

The populist base of the party is as sceptical of the media and career politicians as it is of expertise in general – and even of the government itself. In 1986, Ronald Reagan famously derided an incompetent federal government: “The nine most terrifying words in the English language are: ‘I’m from the government and I’m here to help’.” Grover Norquist, a Reagan disciple and founder of Americans for Tax Reform, put it more bluntly: “Our goal is to shrink government to the size where we can drown it in a bathtub.”

But scepticism of grandiose government overreach is one thing and a general resistance to any “elitist” with an “expert” opinion quite another. The expertise of health professionals who support Obamacare, the hard science on global warming, research on the age of the earth and human evolution, the statistics on the availability of guns and mass shootings – to the base these “facts” are nothing more than politically correct liberal nonsense.

In September, Fox News, the Pravda of the right, reported that 62% of its Republican viewers felt “‘betrayed’ by politicians in their party” – and it seems they’re duly rallying around the straight-shooting newcomers.

But if this populist trend continues, the GOP base will elevate a candidate who is as incapable of attracting voters as he or she is uniformed. One big-name candidate on the opposite side of the aisle – about as insider as an insider could be – is surely grinning from ear to ear as she gets the champagne ready. 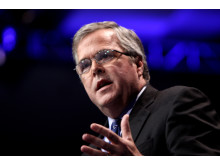