Deputy Chair of the Board of Governors at Northumbria University, Adam Serfontein is Managing Director of the Hanro Group, one of the largest privately owned property investment companies in the North East.

Educated at Rugby School, Adam graduated from Newcastle Polytechnic in 1987, 30 years ago last week, with a Bachelor’s degree in Estate Management.

After qualifying as a chartered surveyor, he worked first for Gavin Black and Partners and then for Chesterton in Newcastle, London and Madrid. He attained an MBA from Middlesex University in 1995 and joined Hanro in 1999.

A local family business, Hanro was founded in 1921 as R. Rankin and Sons Transport. Diversifying into motorcar and fuel sales, with subsidiaries in finance and oil, it at one time employed 650 people. Within a few months of Adam joining the business, it sold its non-core interests to concentrate on property development and investment. Eight years later, in 2007, Adam was appointed Managing Director.

Over the last 20 years, the business has grown significantly. Highlights include the completion in 2002 of Citygate, a two hundred thousand sq ft commercial district near St James’ Park – the first new development in the Gallowgate area for 30 years.

In 2010, Hanro transformed the twenty thousand sq ft, Grade II-listed Coopers Motor Mart on Westgate Road, into striking new studios for architects Ryder. The 1897 building, which stands over a submerged section of Hadrian’s Wall, had originally been a purpose-built horse and carriage display hall – complete with ladies’ viewing gallery – and, later, one of the city’s very first motor dealerships.

Adam chairs NE1, Newcastle’s international award-winning Business Improvement District company. NE1 instigated Alive after Five, an evening economy worth an estimated £700 million, and has secured investments of £30 million for the redevelopment of Central Station and the Bigg Market.

He is also a member of the advisory board for InvestNewcastle, which helps businesses to locate, expand and flourish in the city; and chairs Developing Consensus, an alliance of private- and public-sector organisations, including Northumbria University, that has invested £1 billion in the regional economy over that last ten years. Adam is also Chairman of the Development Board of Marie Curie hospice in Newcastle. 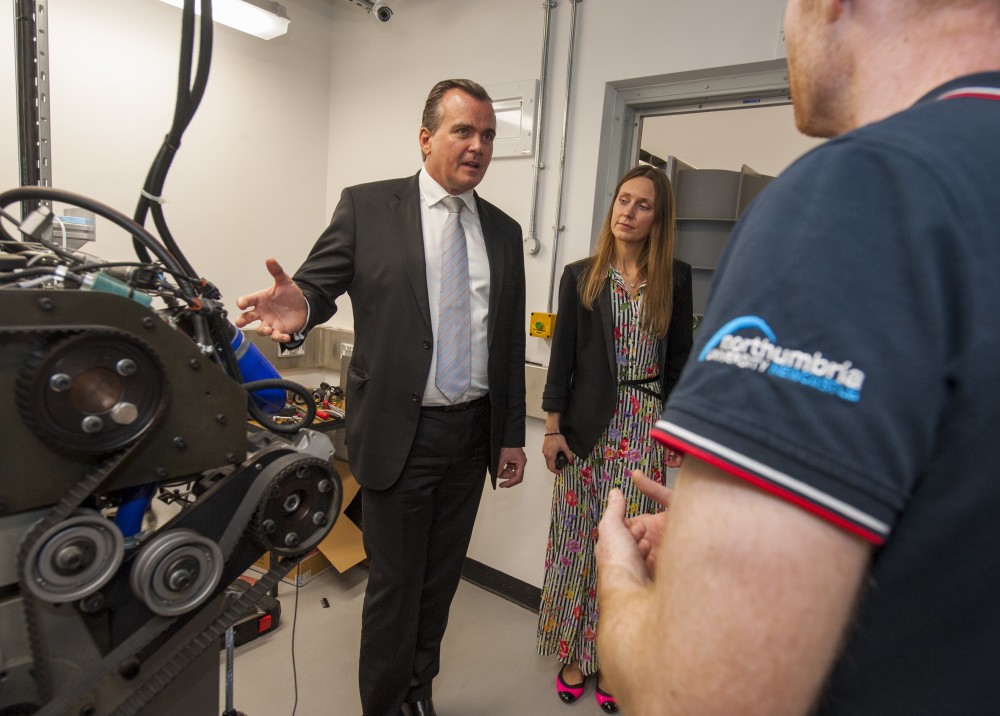 Speaking of his Honorary Degree Adam said: “I have thoroughly enjoyed working with so many colleagues and friends over the years who have been committed to making Newcastle and the wider North East a better place. We still have work to do, but are making good progress. I am very proud of my association with Northumbria and deeply moved in receiving this honour.”

Northumbria University is ranked 1st in the UK for graduate start-ups based on turnover, according to the Higher Education Business and Community Interaction Survey 2015/16 (HEBCIS).

The University has supported the development of more than 130 graduate companies since 2009. The companies employ over 1,000 staff and have a combined turnover of more than £69 million. Most of these businesses are based in the North East but are trading nationally and internationally.

Businesses are being invited to an event at Northumbria University to find out more about degree apprenticeships – the government-backed qualifications which allows students to gain a degree while working and earning at the same time.