Funded by Health Education England, researchers have developed a National Career Framework to ensure that nursing staff have the skills and expertise they need to care for older people with complex needs.

As life expectancy lengthens, the proportion of older people needing care is increasing. This trend is set to continue as people aged 85 and over are the fastest growing age group in the UK. For a significant number of these people, old age brings frailty and that can mean living with more than one long-term medical condition.

Recent reports on the provision of healthcare in hospitals and other settings have found that – despite some outstanding practice – there remain a number of institutions who are failing to deliver good care.

Led by Pauline Pearson, Professor of Nursing at Northumbria, the research team used a survey of healthcare experts, case studies and focus groups to find out which skills were required for nurses working predominantly with older people. From this, they developed the framework which covers a wide range of areas, including values and behaviour, end of life care, clinical skills and safeguarding.

Professor Pearson explained: “The balance of people we look after has changed in nursing. We are caring for more older people than ever before and the reality is that these patients often have multiple conditions which require different types of care.

“We wanted to ensure that nurses are equipped with the skills they need to deal with this, and to do so we needed to think about this problem systematically. By using the framework, we can find out which departments need which skills most and identify units who do not have access to the expertise they need.”

The report – entitled ‘The design and development of a National Career Framework for nurses caring for older people with complex needs in England’ – has already been presented at a national conference organised by the Royal College of Nursing’s Older People’s Forum and the British Geriatric Society. The framework will now be piloted in two hospitals – one in the North East.

Although the framework was originally developed for nurses already in practice, Professor Pearson thinks it could also help NHS commissioners looking to improve nursing education across the country.

She added: “The framework could help to indicate which areas of training are being provided in the curriculum for pre-registration nurses and which areas could be improved.”

Northumbria is in the top quartile in the UK for its research power in Allied Health Professions and Nursing. In the most recent Research Excellence Framework (REF), more than 80% of research in this area is rated as world leading or internationally excellent.

healthresearch and innovationhealth and life sciences

British cystic fibrosis patients who receive lung transplants fare significantly better in the long-term than Americans with either public or private health care insurance according to a new study published today (Tuesday 24 March). 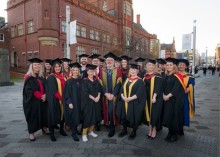