Karen Keane, who is a Lecturer in Sport and Exercise Nutrition within the Sport, Exercise & Rehabilitation department at Northumbria, will appear alongside presenter Anna Richardson on What’s the Right Exercise for You? The programme will feature real people who have used exercise to transform their bodies and lives, and the ups and downs they have faced in the process, as well as sports scientists and experts who will explain the latest scientific findings behind the various exercises featured.

The Channel 4 team made the most of Northumbria University’s state-of-the-art facilities where filming included Anna Richardson having a Resting Metabolic Rate (RMR) test to determine the amount of energy (calories) her body is using at rest.

The well-known presenter – famous for hosting Channel 4’s Secret Eaters and producing You Are What You Eat with Dr Gillian McKeith – had to lie down for up to half an hour and breathe into a mask, called an Oxycon, where gases are collected and measured. This measurement is called indirect calorimetry, which is made by analysing the amount of oxygen Anna’s body uses and the amount of carbon dioxide her body produces. 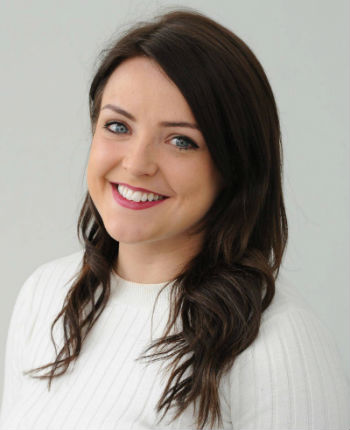 Karen, pictured on the right, is nearing completion of her PhD investigating the bioavailability of Tart Montmorency Cherry Juice and the impact on vascular function and exercise performance, said: “Normally we test the RMR of students and athletes, so testing a TV presenter was a very different scenario. It was a fantastic opportunity to showcase the state-of-the art facilities we have here at Northumbria University on a national stage and I’m very much looking forward to seeing the programme on Channel 4 when it is aired in January.”

The programme specifically explores High-intensity interval training (HIIT) - an exercise strategy alternating short periods of intense anaerobic exercise with less-intense recovery periods - and a study that was carried out among over 50s and the success they had with this particular method of training.

​Sport Coaching students from Northumbria University have worked with footballers with visual impairments to better understand the needs of sports people with disabilities.

​Northumbria University continues to outperform the sector for student satisfaction, according to the results of the 2016 National Student Survey, released yesterday (Wednesday 10 August).

Andrew Ross, Graduate Tutor and Lecturer in Film at Northumbria University, writes about the release of highly anticipated Rogue One: A Star Wars Story.
It was hoped that the release of Rogue One, the current offshoot from the Star Wars series, would cement the Star Wars franchise as being at the cutting edge of modern cinema. Promising a markedly different tone from the previous films