Nursing students have taken part in a staged firearms training event designed to give doctors and paramedics a taste of working in a mass casualty terrorist incident.

Northumbria University worked in partnership with the Great North Air Ambulance Service and Northumbria Police on the simulated learning experience, which was being run for clinicians from around the country as part of an annual training course.

Six paramedics and six doctors took part in the live training event, which featured dozens of casualties displaying signs of blast and gunshot injuries. They had been 'injured' in the simulated terrorist incident and had been given realistic, bleeding wounds requiring treatment. The patients were all played by students from the Department of Nursing, Midwifery and Health who had volunteered for the experience.

The training session was held at Northumbria Police’s Operational Tactical Training Centre in Gateshead. Several officers from the force took part in the scenario, using firearms and explosives to add to the realism.

Jamie Walsh, training manager at Great North Air Ambulance Service, is part of the team behind the charity’s Pre-Hospital Emergency Medicine Crew Course, which gives participants an understanding of what this type of incident may be like in real life.

“It’s not just the critical care they are learning but how to communicate in these very stressful and pressured situations. It’s a really interesting scenario and something which they’ll have never done before.”

Mr Walsh said the day would not have been possible without the support of both Northumbria Police and Northumbria University, with the latter sending 30 pre-registration nursing students to take part in the exercise as part of their studies.

Daniel Monk, senior lecturer and a specialist in urgent care in Northumbria’s Department of Nursing, Midwifery and Health, said: “Northumbria University has been working productively with both Northumbria Police and the Great North Air Ambulance Service for some time, collaborating on a number of high-quality research and teaching projects. This includes this world-class course, where exposure to complex, simulated pre-hospital clinical scenarios significantly enhances the learning of pre-hospital specialists.

“Our involvement in this simulation event provided our nursing students with the unique opportunity to participate in the real-time simulation of a mass-casualty incident.

“They saw first-hand how experienced pre-hospital specialists would prioritise, assess, manage and coordinate casualties at the front-line of an incident of this scale in an urban environment. This immersive experience allows them to develop their acute patient assessment knowledge and skills.

“It is part of our continuing work to ensure that our students learn from realistic scenarios to prepare them for the challenges they may face in their professional careers.”

Third year adult nursing student Rachel Wright said the session was unlike anything she had experienced before and would help her to become a better nurse. “It’s high intensity and a really difficult and emotional subject,” she said. “It was great to see and feel it from the other side and see what people were going through so you can help people and communicate with them.”

Acting inspector Nigel Bennett, from Northumbria Police’s Firearms Support Unit, added that it was great to be able to work alongside partners to train and share best practice. “It enables us to carry out detailed and realistic training exercises that help continue to develop those skills and knowledge that are so vital to our role,” he said.

“It benefits all involved which helps us ensure officers and staff from all organisations are best prepared to handle potential real-life scenarios. We look forward to continuing working together to best prepare and protect the public we serve.”

The students taking part in the session were from Northumbria’s Adult, Child and Learning Disabilities nursing programmes. They all volunteered their services after receiving a detailed brief about the training and were informed about the support available to them afterwards, should it be needed.

Anyone interested in studying Nursing at Northumbria University can find out more at www.northumbria.ac.uk/nursing or register to attend our forthcoming open days in September, October and November. 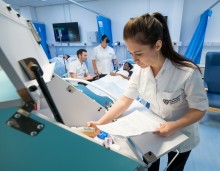 A new route into nursing

The first Registered Nurse Degree Apprentices in England have begun their studies at Northumbria University, Newcastle.

Outstanding staff and inspirational students from Northumbria University have been shortlisted for four prestigious national awards by the Student Nursing Times.

A Northumbria University student nurse has helped to save a man’s life on her way into University.