Research supported by Northumbria University, Newcastle, has found that the majority of workers surveyed at a Rolls Royce aerospace plant in Scotland have not found re-employment since losing their jobs earlier this year.

More than 700 highly skilled engineering jobs were lost at the Inchinnan manufacturing plant in Renfrewshire following a decision by Rolls Royce to significantly scale back its operation in the wake of Covid-19 and the subsequent economic slowdown. Co researcher Dr Ewan Mackenzie, from Northumbria’s Newcastle Business School, believes the failure to secure alternative employment is hugely significant in an economy hit by the Covid-19 crisis.

The research was commissioned by trade union Unite Scotland and conducted in September-October with 100 survey responses giving a statistically significant sample size. It was led by Professor Alan McKinlay at Newcastle University and supported by Dr Mackenzie at Northumbria and colleagues at The University of Glasgow and Newcastle University.

An overwhelming majority of those surveyed reported their preference was to remain in manufacturing after taking voluntary severance. A significant minority of employees reported that they would like to work in the renewable energy sector, specifically wind turbines. However, despite their high level of skill they recognised that they may need retraining in new skills, which would require further qualifications and certification to shift into the renewables sector.

Dr Mackenzie said:“This research reveals that hundreds of the UK’s most skilled engineers are currently out of work and are fearful for their future. Many of these workers are suited to transitioning to the renewable sector and expressed an interest in doing so. The research highlights that there is an appetite for such a transition with adequate training and government support, without which the UK risks losing cutting-edge engineering skills and proficiencies developed over decades”.

The research suggests both that the Rolls Royce job losses are not being absorbed by the Scottish aerospace sector, and that for the majority who have been made redundant any alternative jobs in manufacturing are less likely to utilise their full range of skills and experience.

Pat Rafferty, Unite Scottish Secretary, added: “Rolls Royce engineers are widely recognised to be highly skilled, highly experienced and amongst the most outstanding engineering workforces in the UK. What this new research has discovered is that the vast majority of Rolls Royce workers who have left Inchinnan remain out of work with most of them remaining fearful for their future employment prospects. Importantly, there is a desire by those who have left Rolls Royce to move into the renewables sector. However, this requires two fundamental elements which is jobs actually being created in the renewables sector in particular through the manufacturing of wind turbines, and skills transition support.

“On these specific issues the Scottish Government’s record has been absolutely abject and they need to urgently intervene to provide concrete support for workers who have lost their jobs. If they do not then this research illustrates that there is a real danger these crucial skills will be lost forever.” 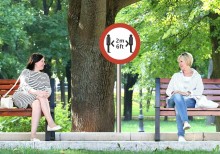 Academics at Northumbria University, Newcastle, are investigating the effects of social distancing on mental health, quality of life and the use of social media amid the COVID-19 pandemic.