A report co-written by Northumbria Law School’s Dr Marion Oswald has been cited in the Lords in support of an amendment proposed to the Domestic Abuse Bill.

The report, Data Analytics and Algorithms in Policing in England and Wales: Towards a New Policy Framework, by Dr Oswald and fellow researcher Alexander Babuta from the Royal United Services Institute (RUSI) was commissioned by the Centre for Data Ethics and Innovation (CDEI). Its aim was to conduct an independent study into the use of data analytics by police forces in England and Wales, and to help ensure operational decisions based on computer algorithms are fair and ethical. Findings from the report have now been cited by Lord Hunt in the House of Lords as part of their examination of amendments to the Domestic Abuse Bill 2019-21, which is currently going through Parliament. These amendments would, if adopted, require the Domestic Abuse Commissioner to encourage good practice in ‘the appropriate use of data and technology.’

Dr Oswald is a Vice-Chancellor’s Senior Fellow in Law at Northumbria University and an Associate Fellow of RUSI. Her research focuses on the interaction between law and digital technology and she has written and advised extensively on this developing area, in particular the increasing use of data analytics by the police and in respect of national security.

Commenting on the report Dr Oswald said: “Our research identified the potential for data analytics to help the police in their work in the important and challenging area of preventing domestic violence. However, technological developments within policing have been inconsistent and often lacking in independent evaluation and oversight. As our report pointed out, if new forms of data analysis are to be used to tackle domestic violence and other crimes, then it will be crucial not only to fully evaluate the technology, but also to assess the human rights and legal implications of the way that the technology is used by the police.”

Professor John Wilson, Pro Vice-Chancellor for the Faculty of Business and Law at Northumbria added: “To have Dr Oswald’s report cited in the House of Lords as part of their examination of such an important Bill reflects the quality, relevance and impact of the research carried out by academics at Northumbria. The knowledge we are creating is not only helping to shape key policy making at the highest level, but also enhancing the real-world learning experience for our students.”

Founded in 1831, RUSI is the world’s oldest and the UK’s leading defence and security think tank. Its mission is to inform, influence and enhance public debate on a safer and more stable world.

For more information on law at Northumbria please visit www.northumbria.ac.uk/law 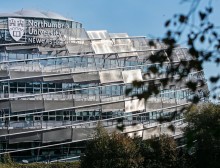 ​Professor Gita Gill from Northumbria University, Newcastle, has been awarded a British Academy Grant to investigate the impact of compulsory land acquisition on poor communities for major infrastructure projects.

A Northumbria University academic has been appointed to an independent panel of experts advising the New Zealand Police service on the ethical use of new technologies in modern policing.