The University hosted a trauma training day for the International Rescue Corps, in collaboration with the specialist rescue organisation.

The International Rescue Corps (IRC) is an international search and rescue charity, made up of a team of volunteers that responds to natural and manmade disasters worldwide using specialist skills and equipment.

The UK-based charity, which is supported entirely by donations made by the public and corporate sponsorship, is registered with the United Nations, allowing the organisation to cooperate as a search and rescue team under their coordination in times of international disaster.

Volunteers have responded to disasters such as floods, hurricanes and earthquakes in countries including Indonesia, China, Mozambique and Japan.

The event at Northumbria’s Clinical Skills Centre gave IRC members the opportunity to undergo intensive training with a variety of dramatic scenarios and simulations. These included trauma-related workshops which covered how to handle spinal care injuries, resuscitation scenarios and how to effectively treat major cuts and wounds.

The day was developed by Northumbria University to help members of the charity to gain an insight into the injuries they may see and have to treat while in disaster situations.

Alongside qualified members of the IRC team, Northumbria academics were also involved in the teaching demonstrations, showcasing the hard work involved in handling specialist rescue cases.

Tony Conner, Senior Lecturer in Adult Nursing and a member of the IRC, said: “It’s fantastic for the IRC to be able to use such outstanding facilities at Northumbria’s Clinical Skills Centre and we are very grateful to all the people involved for allowing this to take place.

“It’s so important for our volunteers to have access to state-of-the-art facilities whilst being trained up, as well as having the opportunity to be taught by lecturers with such high expertise in the field.

“We are relied upon in real-life disasters so it’s crucial that members of the organisation know exactly what to do in an emergency.”

Tony, who has worked as a volunteer for the IRC for several years, has been called upon many times as an international rescue worker. He found himself in Padang tackling the devastation caused by the Indonesian earthquake in 2009 and shortly after was called on to helped to rescue flooding victims amidst the chaos that entailed in Cockermouth, Cumbria.

“Being a rescue worker within an earthquake zone was humbling,” said Tony. “The local population carried on with their lives as best they could.

“Indonesia was my first earthquake experience and the first time I had to search under a collapsed building alongside a very experienced rescue worker. The thought that the building may collapse at any minute was always at the back of my mind.

“Another major rescue mission was within the Cockermouth floods where we helped to rescue people from their homes via upstairs windows and provided water and food to people trapped within their own homes.

“The water was very fast flowing which made any rescue mission difficult. However, with the training each IRC member undertakes, it allows each rescue worker to function as a valuable team member. This is why the training held at Northumbria is extremely valuable to us as a team.”

Sheila McQueen, Head of Public Health and Wellbeing at Northumbria University, said: “We are absolutely delighted to support the International Rescue Corps in helping with their trauma training day.

“We provided access to our excellent clinical centre and simulation facilities which can effectively support their training, which allows the charity to continue their admirable response services to the world when tragedy occurs.”

For more information regarding the IRC, visit www.intrescue.org 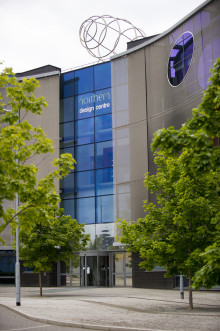 Northumbria University, Newcastle, has partnered with the Scottish knowledge exchange hub Design in Action (DiA) to stage a two-day residential workshop and networking event to promote well-being and healthcare.

In the past few years, many businesses have developed sustainable strategies where social responsibility is an integral part of their business model.