​Tackling hate and fear propaganda through prosecution at international criminal tribunals and beyond was debated by a global panel of legal and social sciences experts in the field, during a recent conference at Northumbria University.

Open to members of the public, the conference explored why and how dealing with hate and fear propaganda at international criminal tribunals and beyond needs to be improved. Keynote addresses were made by an international panel of experts from countries including the USA, Australia, Hong Kong, the Netherlands and the UK. Judge Sir Howard Morrison, one of UK’s most senior judges, also shared his views and expertise and experiences as Judge at the Appeal Division of the International Criminal Court.

This symposium discussed the necessity of an improved approach to hate and fear propaganda at international criminal courts. While empirical research strongly indicates that propaganda effectively shapes the beliefs and actions of the public, these findings have not been translated into the legal sphere. Judgments at international criminal tribunals reveal substantial challenges to effective prosecution of hate propagandists resulting in unsatisfactory outcomes. Event organisers Professor Mohamed Badar and Dr Polona Florijančič, explained that because of these challenges the symposium brought together legal academics and practitioners as well as social science experts who were able to present on a multi-disciplinary range of topics.

Professor Badar, Chair of Comparative & International Criminal Law at Northumbria, added: “Attracting so many distinguished experts and speakers from around the world to this two-day event reflects not merely how timely this discussion is but also how complex and intriguing it is. Ensuring the effective prosecution and prevention of hate and fear propaganda leading to mass atrocities is essential if, as an international community, we are to deliver justice for victims and prevent future large-scale crimes.

“The conference was a rare opportunity for experts and members of the public to hear the views of some of the most pre-eminent minds in this field – a number of whom have had first-hand experience of participating at propaganda trials.”

1) The Nature, Manifestations and Effects of Hate and Fear Propaganda

4) Ongoing Hate Propaganda in Different Regions of the World

The event also included a book launch of the ground-breaking 'Propaganda and International Criminal Law: From Cognition to Criminality', (Routledge, 2020), edited by conference speaker, Prof. Predrag Dojčinović and including the contributions of several distinguished scholars who also presented at the conference. 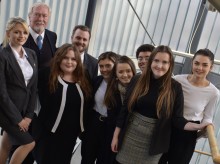 Northumbria Law School students have met with one of the UK’s most senior Judges to learn how international criminal law has developed since the Nuremberg trials after World War II.

Laws to tackle human trafficking and modern-day slavery were examined in detail this week at an international conference organised and hosted by Northumbria University.