Founded in 1916, OSA is the leading professional association in optics and photonics, and home to accomplished science, engineering, and business leaders from all over the world.

Through world-renowned publications, meetings, and membership programs, OSA provides inspiring information and interactions, which power success in the field of light.

The work carried out by the OCRG, has resulted in the publication of six books, over 800 other publications and more than 55 PhD graduates.

It also led to Northumbria University being chosen as the only institution to be involved in the €3.75m (£3.44m) Visible Light Communications based Interoperability and Networking (VisIoN) project, funded by the European Commission.

Professor Ghassemlooy is the project lead on this research, which looks at the use of visible light communication to transmit information – known as LiFi technology.

LiFi uses LED lights, such as those found in the ceilings of buildings, which turn on and off at a very high speed, not visible to the human eye, allowing them to communicate with LEDs in phone or tablet screens.

Professor Ghassemlooy’s research has shown many benefits to using LiFi – one being that users will not be exposed to radio frequency radiation as with WiFi, meaning it is safe to use in areas such as hospitals.

LiFi can also be used within homes and work places, as well as for car-to-car communications; underwater communications systems between various manned and unmanned platforms; for communication between handheld devices and as an enabler for local positioning systems.

Commenting on his election into The Optical Society’s 2020 Fellows Class, Professor Ghassemlooy said: “I am extremely honoured to be recognised for my contributions in the field of optical wireless communications by my peers.

"Working with scientists and researchers at a global level and through leading professional association of OSA has made it possible to have a large impact on the development of free space optics and visible light communications.”

The OSA Fellow Members Committee, led by Aref Chowdhury, Nokia Corporation, USA, reviewed more than 200 nominations submitted by current OSA Fellows and recommended candidates for election to the Awards Council and OSA Board of Directors.

No more than 10 percent of the total OSA membership may be Fellows at any given time, making each year’s honourees a highly selective group.

Northumbria recognised for supporting its researchers

​Northumbria University, Newcastle, has retained an international award for the supportive environment it provides for research-active academics. 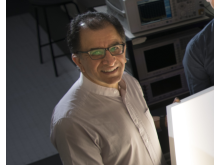