The environmental chamber recreates conditions from around the world, allowing athletes to acclimatise prior to competing in cold, hot or humid conditions, or at high altitude. Referees, Michael Oliver and Gary Beswick, who officiated at the FIFA U-17 World Cup in Chile, visited Northumbria to help prepare for the hot and humid weather of South America.

The heat acclimation tests were overseen by Dr Martin Barwood, Research Fellow in Northumbria’s Department of Sport, Exercise and Rehabilitation. He explained: “Exercising in the heat can be really debilitating if you are not prepared for how you will respond. Officiating is full of high intensity exercise efforts which put the officials at a high risk of heat illness.

“Michael and Gary underwent repeated tests that will improve their sweat response, their heat tolerance and most importantly their perception of that strain. It was a privilege to work with them and this project shows the important role the University can play in supporting elite level sports performance.”

Michael, who became the youngest referee in Barclays Premier League history in August 2010, said: “The opportunity provided by Northumbria University and Professional Game Match Officials Limited was very much appreciated. It allowed us to acclimatise to the conditions we experienced in Chile and provided us with a fantastic base to perform to the best of our abilities.”

To find out more about the state-of-the-art facilities at Northumbria, click here.

Football referees cope by thinking they are better than other refs 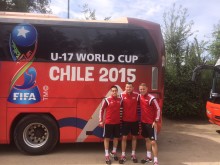