The virtual design and construction competition, was the latest in the Build Earth Live series and saw international multidisciplinary teams tackle what would be the largest development in New York since the Rockefeller Center.

The group in Newcastle, lead by BIM Technologist Kieran Stapleton and Harriet Latimer, included a whole host of Northumbria staff and students, with a number of Engineering and Environment lectures including Oliver Jones, lecturer in Digital Architecture and Design Communication, Barry Gledson, Senior Lecturer in Construction Project Management and Zaid Alwan, lecturer of Architecture and Sustainable Buildings.

Working alongside design lead, Sarah O'Connor, a number of students from Northumbria's Construction Management and Architecture courses were also involved in the project, observing and reviewing the model for further improvements to be made, before the final version was presented to the panel.

BIM Academy is a unique joint venture,co-founded by Northumbria University and Ryder Architecture in 2010, with the vision of creating an international centre of excellence for Building Information Modelling (BIM), through the complementary activities of research, education and consultancy.

Both organisations are leaders in the field and recognise the benefits which can be delivered to industry through independent evidence-based innovation, research and learning, ultimately leading to enhanced business value and growth.

Kieran Stapleton, said: "BIM Academy and Ryder Architecture have been involved within these competitions since 2009 and have been extremely successful, winning awards in all competitions and coming out overall winners on three occasions: in Qatar, Sydney and now New York.

The knowledge shared and acquired through competitions such as this is unquantifiable, especially with a relatively young team with a number graduates and apprentices. The more senior team members adopted a mentoring role, but the learning process was two-way – younger and more experienced team players all learned from each other.

A Northumbria graduate has been awarded a Red Dot prize for her innovative product design work at a global hi-fi manufacturer.

Students and staff from the last five decades came together recently to celebrate 50 years of Building Services Engineering at Northumbria University.

Designers take bite out of the Big Apple

Graduates from Northumbria University recently jetted across the Atlantic to exhibit at the prestigious International Contemporary Furniture Fair (ICFF) in New York for the fifth year in a row. 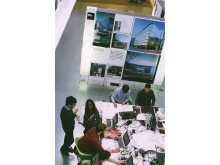