The Scottish Government last week announced that it will introduce legislation to quash the criminal convictions of hundreds of former Scottish coal miners, after publishing an independent review which was partly informed by research from a Northumbria University academic.

Hundreds of former miners received convictions during the 1984-85 miners’ strike following a dispute between the unions and the state-run National Coal Board (NCB) over pit closures across the UK.

Professor Andrew Perchard, from Northumbria’s Newcastle Business School, is an expert in the history of the British coal industry, including studying the legacy of the 1984-5 strike and of coalfield closures. Findings from his research were cited in the Review, which investigated policing of the industrial action. Launched by then-Justice Secretary Michael Matheson MSP in 2018 and chaired by John Scott QC, the Review concluded that most convictions would not be upheld today, and that punishments were handed out in a “grossly excessive manner”. These findings are expected to lead to new legislation paving the way for convictions to be overturned.

According to the Coalfields Regeneration Trust up to 6 million people across the UK with ties to the mining industry are still being disproportionately affected by coalfield closures (and the legacy of the strike), leaving a legacy of profound scars on their communities and socioeconomic inequalities. Removing the criminal records would therefore come as a relief for miners and their families who have been campaigning for decades to clear their names.

Professor Perchard’s research has also looked at how the strike was managed by the National Coal Board in Scotland compared with other areas of the UK. He explains: “The overwhelming majority of those striking miners in Scotland who received convictions for public order offences did so for very minor transgressions. That had a profound impact for those involved, especially as the hard-line attitude of the then NCB Area Director meant that many of them were not reemployed in the industry after the Strike and experienced discrimination in seeking other employment. This can be contrasted with the far more measured and humane approach of the South Wales Area Director. Having a criminal record has brought significant hardship and stigma, including marital and family breakdowns, and mental health issues. The impact has been felt over many years and has been multi-generational and hit whole families. It has also resulted in a profound distrust of the police in mining areas.”

Professor Perchard is also currently co-leading a large research project, with Professor Keith Gildart at the University of Wolverhampton, with £655,000 of funding from the Arts and Humanities Research Council (AHRC) investigating the history of the nationalised coal industry and the legacy of pit closures. He hopes that this ongoing work will help to inform and prompt policy makers and governments elsewhere in the UK to look again at these convictions.

“Sadly many former miners will have died before receiving any pardon – but if my research, and that of other historians, can contribute in any way to persuade policy makers to look again at these convictions then that would be all to the good”, he added.”

Professor John Wilson, Pro Vice-Chancellor for the Faculty of Business and Law, said: “The 1984-5 miners strike was a landmark moment in the nation’s industrial and cultural history, and one which has left a mark on communities right across the UK. To be able to contribute to and shape policy-making around how we manage this legacy reflects the clear impact our research at Northumbria can have and the difference it can to peoples’ lives. I congratulate Professor Perchard on his work.”

The almost year-long nationwide strike began in 1984 over large-scale colliery closures. It was also seen as a political struggle between Prime Minister Margaret Thatcher’s Conservative government and the trade unions. 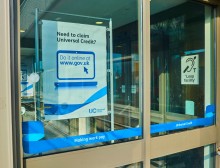 ​A Northumbria University academic is calling on the Government to provide financial support to people waiting for their first Universal Credit payment.