A Northumbria University graduate has launched the first ever vegan festival to be televised on national TV in the United Kingdom.

Launching the vegan festival just two years ago in the North East - the first specialist event of its kind in the region - Louise Pinchen is set to organise the first ever vegan festival to be televised nationally.

Graduating from Northumbria in 2014 with a BA (Hons) Business Creation degree, the entrepreneur is aiming to raise awareness of veganism and show people how it can improve their lifestyle, in a fun and exciting festival environment that has grabbed the attention of several well-known celebrities including Joanna Lumley, Jenny Seagrove and Antony Worrall Thompson.

Louise said: “I had attended many vegan festivals throughout the UK and loved them. The sense of community was something I had never felt before and the friendly welcoming atmosphere was amazing yet I knew there was no vegan festival in my home town of Newcastle upon Tyne, so equipped with the skills I developed at Northumbria, I decided to launch it myself!”

The fantastic success of the first festival in 2014, led to the specialist event becoming an annual occurrence and expanded up and down the country, with festivals now held in Edinburgh and Sheffield too.

The 22 year old, explained: “The amazing success and attendance of the festival was not something I expected so it is a really exciting time. Seeing fantastic vegan businesses coming together to create a festival which has gained huge support from the UK public is amazing, and it’s such a great feeling to organise an even which brings everyone together under one roof so people of all ages can chat, have fun and make new friends.”

With this year’s festival in Newcastle set to be televised by Made in Tyne and Wear TV, Louise looks back at her time at Northumbria as a crucial step in becoming a hugely successful entrepreneur.

She said: “When I came across the BA (Hons) Business Creation degree, it seemed really unique as not only did you learn about how to start your own business and the mechanics of it, but you were actually given the opportunity to start a business for real. The skills I developed at Northumbria really were invaluable in my ability to run my own business.”

For more information about when and where this year’s Vegan Festivals are set to take place, visit http://veganfestival.co.uk/

Anyone interested in studying Business courses at Northumbria University can find out more about it at the University’s summer Open Days which are being held on Friday 1 and Saturday 2 July. Visit www.northumbria.ac.uk/opendays for more information.

Growing the next generation of North East movers and shakers at Northumbria University, Newcastle.

​From Facebook founder Mark Zuckerberg to perfumery pioneer Jo Malone; who began making perfumes with flowers from her garden at just nine-years-old, entrepreneurship is a skill that can be successfully harnessed from a young age. 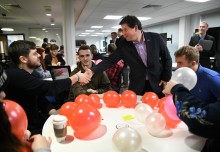 A US-based entrepreneur and start-up investor has returned to Northumbria almost 30 years after studying at the University, to meet current students and share his experiences in business. 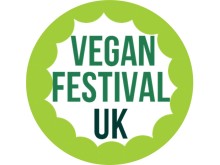