Northumbria University, Newcastle, has signed a clutch of partnership agreements with leading universities in Mexico as it broadens its presence and profile in Latin America.

The agreement with BUAP, which has more than 50,000 students and is the oldest and largest university in the Puebla region of Central Mexico, was signed by the Rector of BUAP, Alfonso Ortiz Esparza, and Northumbria’s Pro Vice-Chancellor (International) Jon Reast.

UNIVA is a large privately run and not-for-profit university in Guadalajara, Eastern Mexico, where Northumbria has been keen to establish a presence.

Professor Reast was visiting Mexico as part of a UK Government-led delegation comprising a number of leading higher education institutions, primarily from the Russell Group of universities. As well as meeting leaders and academics from universities, the schedule also included events hosted by Mexico's President Enrique Peña Nieto, and other senior ministers.

Commenting on the trip Professor Reast said: “Both BUAP and UNIVA are leading universities with international reputations and we are delighted to have signed these mutually beneficial agreements with them. They offer significant opportunities for research collaboration and partnership to bids for additional research funding. It also means we can enhance the learning experience of our students and staff through reciprocal exchange opportunities. For example, many of our International Business with Spanish students study in Spain during their course, but we know that many would like to go beyond Europe and this opens doors for them in different regions of Mexico.

“For Northumbria to be part of international delegations such as this, alongside the Russell Group universities, shows how far we have come in recent years and the growing strength of our global profile and reputation.”

Northumbria’s agreement with BUAP and UNIVA builds on others in Mexico, including a well-established 10-year relationship with Universidad Iberoamericana – one of the largest private universities in Mexico. Professor Reast believes it will also strengthen business partnerships in the region, particularly in the energy sector. He explained:

“Through our links with UNAM we already have a number of internationally recognised academics working with Mexico’s national oil and gas company Pemex,” he explained. “The Mexican Government has recently stated that the country needs an additional 800,000 trained engineers, especially in pipeline engineering, so with UNAM and now with BUAP we are well placed to help meet this requirement. Signing this MoU is a significant development and promises exciting times ahead.”

Two internationally acclaimed creative writers will collaborate on a homelessness project spanning the North East of England and Africa, at Northumbria University, Newcastle. 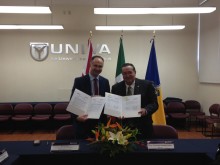