A reality TV contestant who won a place at Northumbria is celebrating a successful year of study – and an unforgettable time in Newcastle.

Anthony Kofi-Annan triumphed in 2014’s ‘The Challenge’ – a Ghanaian show similar to The BBC’s Apprentice – and the prize was a scholarship with Northumbria.

The 27-year-old from Ghana is studying for an MSc Business with Financial Management degree at Northumbria’s Newcastle Business School, and has received very positive feedback from lecturers and university staff.

He said: “I applied to go onto ‘The Challenge’ because I wanted the scholarship to Northumbria University – and it’s been one of the best decisions I’ve ever made in my life. I’ve really enjoyed everything about the experience. The lecturers have first-hand experience of the industry, which makes the course even more interesting. Life in Newcastle is wonderful. I had heard of Newcastle as I’ve followed the English Premier League and made sure I did my research before going into the show.”

Anthony applied to be on the sixth series of ‘The Challenge’, an extremely popular show which is run in partnership with the British Council and offers fully sponsored post-graduate scholarships as prizes.

The show gave students across Ghana the chance to showcase their intellectual and creative talents, with contestants competing against each other over three months in a range of televised tasks and interviews. One of the tasks involved selling white unmarked T-shirts, and the teams were assessed on revenue raised and marketing strategies.

Anthony’s team decided to use the T-shirt as a platform to create awareness on the prevention of the Ebola virus, and for greater impact they collaborated with a Government institution in Ghana championing a similar cause.

‘The Challenge 2014’ was sponsored by Ghana-based telecommunication company Tigo in collaboration with the British Council Ghana and supported by Northumbria University, Newcastle; Robert Gordon University, Aberdeen and the University of Salford in Manchester. The show was produced by GhOne TV, a Ghanaian based multimedia company.

Anthony joined two other winners from the education show in securing positions at UK universities – and his successful year has made him an advocate for university life abroad.

He added: “I definitely believe that it’s important to study abroad; you get a completely new perspective on study, on culture and diversity and on different ways of working. I would recommend studying at Northumbria University to people all over the world.”

Northumbria University’s international recruitment manager Simon Foster said: “Anthony continues to shine and we’re keen to see how he progresses. Feedback on him has been fantastic - lecturers are very proud of him, as are his family, and as am I. He is a very good representative for Ghana and is doing the country proud.”

Masters study at Northumbria is designed for those students who want to change direction in their career or give it an extra edge, or for those who have a burning passion for their area of study.

To find out more about postgraduate study at Northumbria University, visit www.northumbria.ac.uk/pg 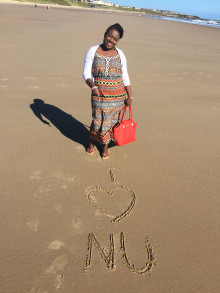 Northumbria steps up presence in Africa

Northumbria University, Newcastle, has appointed a new recruitment manager in Africa to help look after rising numbers of applications from students in Nigeria and Ghana. 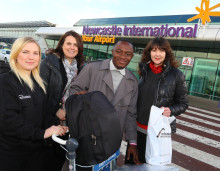 Reality TV contestant Anthony Kofi Annan has won a place at Northumbria University, Newcastle, after triumphing in ‘The Challenge’. 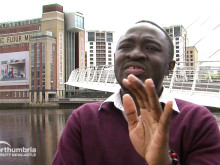