The ability of gender-based violence victims to access support services during the Covid-19 lockdown has not been accurately portrayed in the media, with potentially damaging consequences, according to new research.

Within days of lockdown restrictions coming into force in the UK in March this year, reports began circulating in the media of a huge rise in demand for telephone helpline services provided by charities working with victims of gender-based violence.

However, research by academics at Northumbria University reveals that, while some services did experience an increase in calls, around twice as many actually reported an initial drop in contact from service users.

This suggests that, despite helplines remaining open during lockdown, many victims may have found themselves unable to access this support.

The research team based at Northumbria Law School, comprising of Ana Speed, Callum Thomson and Kayliegh Richardson, believe inaccurate reports in the media about the demand for support services could have negative consequences, especially given a potential second peak and increasing local lockdowns now being faced across the UK.

As they explain: “The over simplistic message we saw portrayed in the media, that there had been a dramatic increase in calls to services supporting victims of gender-based violence, is potentially damaging as it may lead the public to disengage if they believe that all victims are able to seek help easily.

“It might also lead to victims to believe that they might not be able to access services which are portrayed as already being inundated with enquiries.

“We know many charities and support services have seen a drop in funding during lockdown and ensuring a more balanced and accurate approach to reporting is important to ensure much-needed support from the public and other funders in future, especially during any subsequent lockdowns.”

A questionnaire devised by the team of researchers was completed by 51 organisations working to support victims of gender-based violence, including those specialising in supporting black and minority ethnic victims, male victims and LGBT victims.

The respondents varied in size and geographical presence, from large commissioned organisations with a national offering, to small services and those located in rural settings.

The purpose of the study was to examine the impact of Covid-19 on the ability of victims of gender-based violence to access justice.

The main findings of the research were:

Speaking about the findings, the researchers said financial support for gender-based violence services was urgently required if such organisations were to survive.

The team explains: “We hope these findings dispel reports that all GBV support services are facing an unprecedented increase in demand for their services during this time.

“Our findings indicate that whilst services were able to demonstrate resilience in the weeks following the initial lockdown measures, many of those which responded are facing tough times ahead.

“This is for a variety of reasons including concerns about staff and volunteer retention; loss of funding; increased administration; resourcing difficulties in moving vital services online and delivering services in a safe and effective manner.

“If the government fail to take the action required now, many organisations will not be able to withstand the coming months and the government’s own message of ‘#YouAreNotAlone’ will be considerably undermined.” 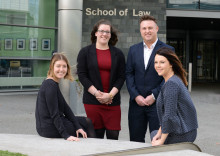 A project run by law students and academics at Northumbria University to provide free community legal support has reached the finals of a highly prestigious national award.