Ahead of an election in Spain in which a large proportion of voters are still undecided, one party is causing a major stir. Vox is campaigning largely on an anti-separatist ticket – proposing recentralisation of powers to Madrid after decades of devolution to regional powers.

Its eruption onto the scene cannot be explained by combining clichés about a Francoist comeback. What is happening in Spain is not like the populist, anti-immigration euroscepticism in vogue elsewhere. Comparisons with the Brexit and Trump campaigns abound, but these only offer misleading explanations for a phenomenon that is firmly rooted in one internal Spanish affair: the Catalan crisis of 2017.

From the outside, the surge of Vox looks typical of the political atomisation that followed the prolonged systemic crisis of 2008. Yet in Spain, that gap was already plugged by Podemos, the anti-austerity party that grew out of the protest movements of a decade ago. The Vox story is quite different. The party was created in 2013, but it only took flight in 2018, straight after the Catalan referendum.

This new party can only be understood in the context of Spain’s territorial struggle. This is a country that has undergone a major process of decentralisation while simultaneously suffering from a post-Franco identity crisis that almost proscribed any emotional attachment to the nation’s collective history.

In this there is a nuanced similarity between Vox and the patriotic aesthetics of some other movements – like Brexit, Vox displays a revival of historicism. One of the pillars of the Leave narrative was a simplification of World War II that presented Britain as the continent’s saviour from German expansionism. This fuelled a sense of exceptionalism and the associated idea that “they need us more than we need them”.

In Vox’s case, its leader Santiago Abascal has purposefully rallied his growing crowds of supporters alongside the monuments to three national heroes: Pelayo, El Cid and Blas de Lezo. All three have something in common: they’re brave but unlikely heroes defending a Spanish nation under attack.

Pelayo, a Visigothic lord who fought against the Muslims in 722AD, is credited in Christian legend with creating the Kingdom of Asturias. His foundational myth is that of a “plucky underdog”. Armed with stones, Pelayo defeated the mighty Munuza, catalysing a Christian fightback.

El Cid is another semi-mythical figure, and the historical reconquistador of Valencia. A soldier of fortune who fought both for and against the Christians during his lifetime, El Cid is presented, in the first surviving lines of the canonical Spanish epic, as a vulnerable hero. He is found “weeping very sore” following his banishment from Castile.

And the statue of Blas de Lezo, in Madrid, is Vox’s most iconic location. Lezo, a Basque admiral, defended Cartagena de Indias from British attacks in 1741. The ultimate underdog, he was nicknamed “The Half Man”, as he delivered this naval victory despite losing a leg, an arm and an eye in the process. Abascal skilfully blends his own biography into this storyline. He was born in the depths of the Basque Country and narrowly escaped ETA’s many attempts to assassinate him. He presents himself as a credible, defiant victim. 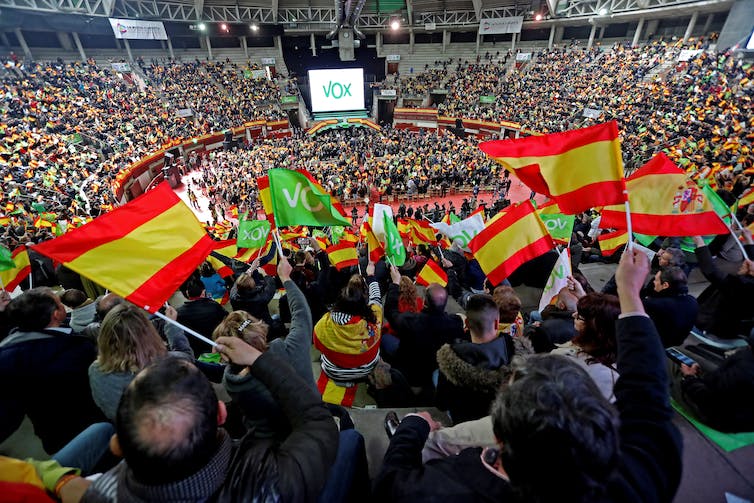 Vox supporters gather at a rally in Madrid. EPA

Vox’s patriotic discourse holds the strong appeal of emotive simplicity. It is a David and Goliath narrative in which David is the beleaguered Spanish nation and the Goliaths are the powerful regional governments. The regional powers in wealthier regions such as Catalonia have come to represent a particularly potent existential threat to not just the nation but many of its citizens. VOX therefore wants to suspend their powers.

Where other European far-right parties use an ethno-nationalist narrative to paint the EU or other supranational powers as the enemy, Vox attacks the ethno-nationalism within its own nation. It is the Basque and Catalan nationalists who base their ideas on tribal and ethnic exceptionalism.

Basque nationalist ideas stem from 19th century race-based theories about the Basques’ distinctive DNA. The current Catalan leader, Quim Torra, has been accused of xenophobia for various remarks he has made over the years referring to Spaniards as “beasts” who have a “glitch in their DNA”.

Torra’s rhetoric is underpinned by a sense of Catalan supremacism over the Spanish speakers from the south of the country, many of whom have migrated to the wealthier Catalan region in search of better opportunities. In other words, a wealthy, northern elite sees its neighbours – the Spanish speakers – as inferior beings.

In Spain, ethno-nationalism is the defining feature of peripheral independence movements rather than the hard national right. Vox is capitalising on this by promising to focus on Spain’s historical “survival” after four decades of continuous devolution. The “plucky underdogs” of history are now the Spanish-speaking children prevented from studying in their mother tongue in Catalonia, the small business owners fined for advertising only in Spanish, the working class from Spain’s interior mocked by Catalonia’s wealthy bourgeoisie. If Vox secures a place in the national parliament, the independence movements can expect a difficult time ahead.

Dr Carlos Conde Solares is a senior lecturer in Hispanic Studies at Northumbria University, Newcastle. You can see his original article in The Conversation here.

EXPERT COMMENT: Ebola outbreak spreads to Uganda – it should never have happened