No Yes
A. and I. Kruk/Shutterstock.com

Writing about positive emotions may help to reduce stress and anxiety, according to our new study, published in the British Journal of Health Psychology.

Earlier research has also found that writing about negative emotions – getting things “off your chest” – can improve your mental health. And it seems to benefit physical health, too.

Stress affects your physical health, so it is thought that improvements in mental well-being might stop people becoming physically unwell. Research has shown that writing about negative emotions can lead to fewer visits to the doctor, fewer self-reported symptoms of ill health, and less time off work due to ill health.

Earlier research has shown that writing about positive experiences for 20 minutes a day, for three consecutive days, improved people’s mood and led to fewer visits to the doctor. Even writing for as little as two minutes a day about a positive experience has been shown to reduce the number of health complaints that people report.

While earlier studies showed that writing about positive experiences can improve your mood, we didn’t know what effect it might have on stress and anxiety.

For our study, we investigated whether writing about a positive experience – which could include anything from being moved by a good book, painting or piece of music, to falling in love – could reduce stress, anxiety and common health complaints, such as a headache, back pain or coughs and colds. We also wanted to know if it would be helpful for all people, regardless of their level of distress. 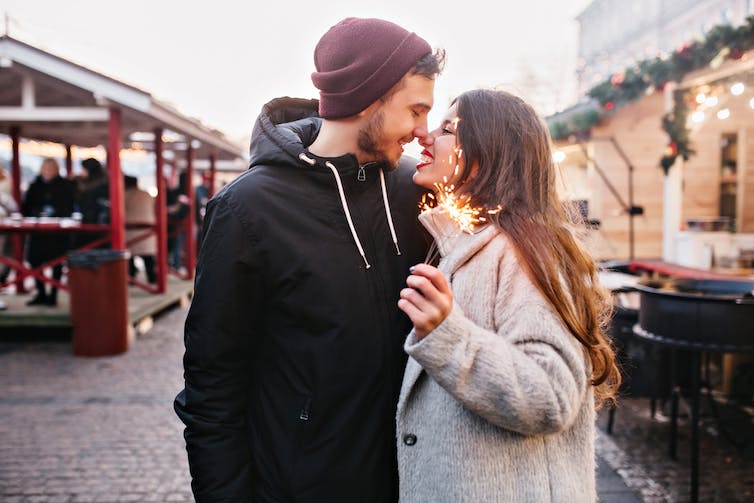 Writing about falling in love could be good for your mental health. Look Studio/Shutterstock.com

We measured levels of anxiety, as reported by the participants, immediately before and after they completed their writing task. We found a significantly greater decrease in anxiety for those people who wrote about positive experiences, compared with those who wrote about neutral topics.

The participants also reported their levels of stress, anxiety and physical health complaints four weeks after they completed the writing tasks. Stress and anxiety decreased to a significantly greater extent for those who wrote about positive experiences after four weeks, compared with the levels reported before they completed the writing tasks. However, writing didn’t improve participants’ physical health problems.

We also found that writing about happy moments was effective, regardless of the levels of distress that people reported at the start of the study.

Because we excluded people with a diagnosed psychological condition, we can’t be sure that this technique would work in a clinical setting. It’s also important to note that in order for them to engage with the task, it wasn’t possible to blind participants to the treatment. Another limitation of our study was that we relied on self-report questionnaires, rather than using objective measures of mental and physical health.

Of course, emotional writing may not be for everyone. Personality traits, problems expressing emotions or a disinterest in writing might mean that for some people there are better ways to tackle negative emotions.

An advantage of writing about positive emotions to tackle stress and anxiety is its simplicity. Unlike many other strategies for improving psychological well-being, this task needs no training or time spent with a therapist. People can do it at a time and place that is convenient for them – and it’s free.

University students: how to manage the stress of studying for your degree

Hundreds of thousands of students across the country prepare to go to university for the first time, or are returning to their studies after the summer. It can be a stressful time for many, so Dr Michael Smith, Associate Professor in Northumbria University's Department of Psychology, has written for The Conversation on how to manage the stress of studying for your degree.