Across the UK, retailers are struggling to survive. This is down to several factors: years of austerity and low wage growth has meant that households have less spending power, the cost of imported goods has risen – as has the national minimum wage – and the trend of “bricks to clicks” means more consumers are shopping online, from the convenience of their home, than in store.

This is not just bad news for retailers. Empty shop fronts blight the high street in towns and cities across country. Research I conducted, together with the R3intelligence team at Northumbria University, found that retail is in decline across most of England and Wales, with just a few areas bucking the trend.

By comparing the government’s own data on business rates – based on values from 2008 to 2015, and made available in the 2010 and 2017 rating lists – we have been able to analyse changes in the number and value of retail properties across England and Wales over that period. The map below shows how the average “rateable” value of retail floorspace – which is its estimated value on the open rental market – has changed in each local authority. 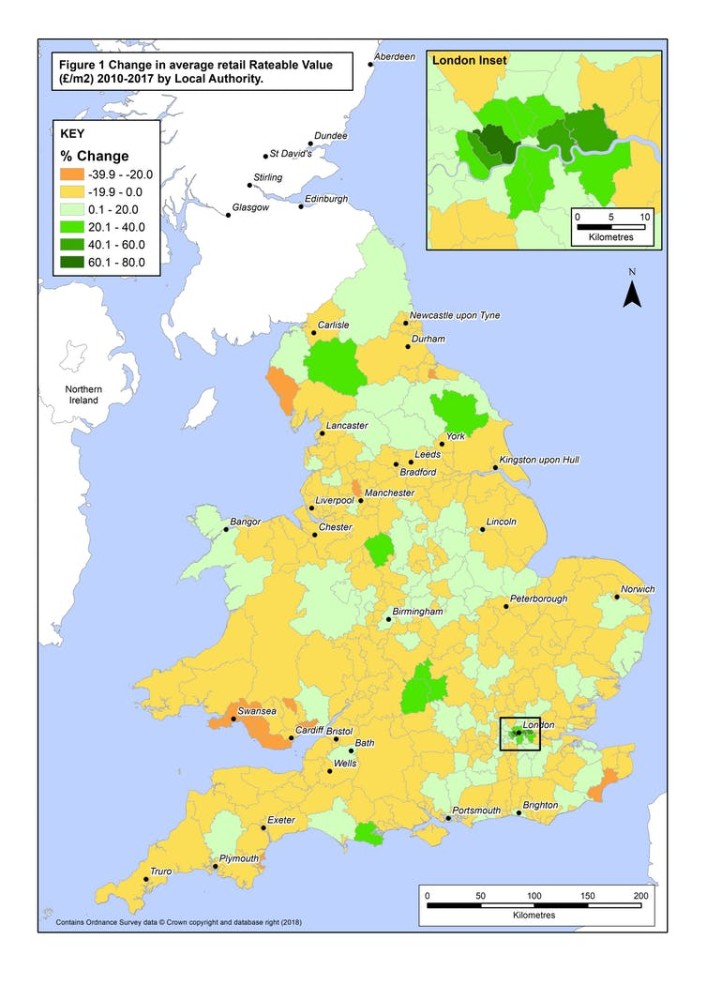 In the green areas, rateable values – and market rents – have increased. But most local authorities across England and Wales have experienced a decline in values. In fact, in two-thirds of local authorities (231 of 348), values fell by up to 20% between 2008 and 2015. South Wales in particular has experienced the most significant decrease in values where towns such as Swansea, Port Talbot and Bridgend are still reeling from the decline of the steel industry.

The exception to the general trend is central London, where the inner cluster of boroughs experienced large increases in value – aside from the City of London, where there’s relatively little retail floorspace. The highest increase was recorded in Westminster, where the average rateable value for retail premises grew by almost 80%; a few rural areas also experienced large increases, exaggerated due to the small aggregate retail floorspace. 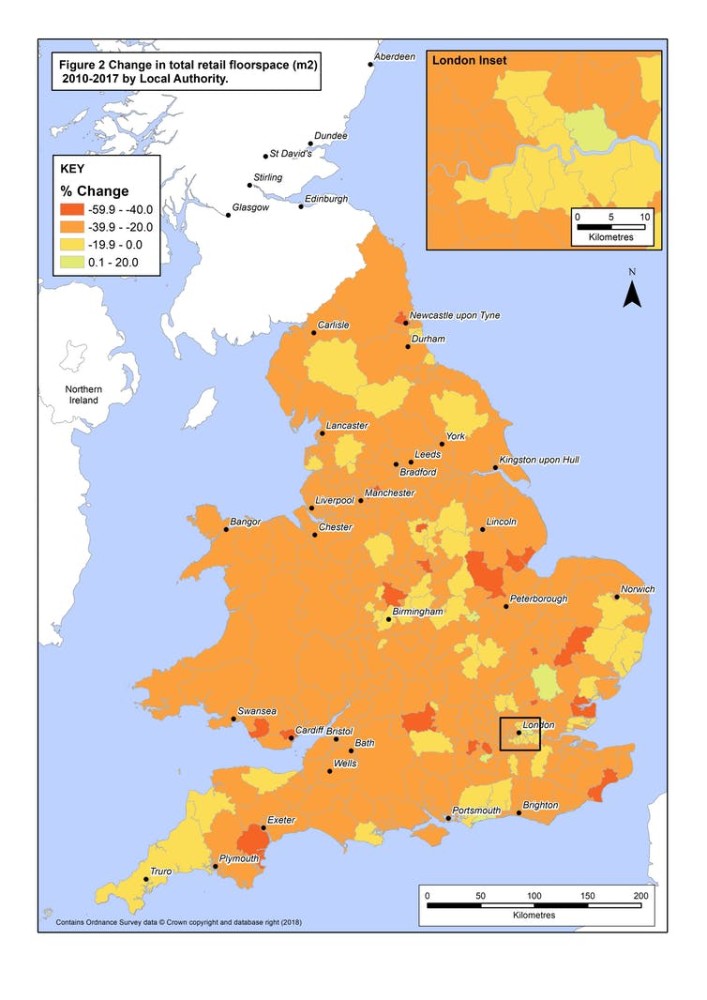 In 2008, there were more than 157m square metres of retail floorspace. By 2015, this had fallen to just under 114m square metres, which represents a reduction of 27.6%. Even in London, all but one borough experienced a decline in retail floorspace: Newham was the exception here, having reaped the benefits of Westfield’s Stratford City shopping centre which opened in time for the London 2012 Olympics.

The killer combination of falling values and reduced floorspace is illustrated in our third map, which reveals that 95% of local authorities (331 out of 348) recorded significant decreases in the total rateable value of all the retail premises in their area, over the seven-year period. This is important because the rateable value is the basis on which business rates are levied – the lower the value, the lower the tax revenue generated by local authorities.

The areas in dark orange present the most acute signs of distress in the retail sector. These aren’t only areas experiencing post-industrial decline, such as South Wales, Barrow in Furness, Bristol, Hull, Teesside and Tyneside – they also include local authorities across the English and Welsh shires.

Some central London boroughs have fared better, with Newham revealed to be the only area in England and Wales where total rateable values have increased by more than 40%. Retail spaces in Hackney, Tower Hamlets and Westminster also grew in value. 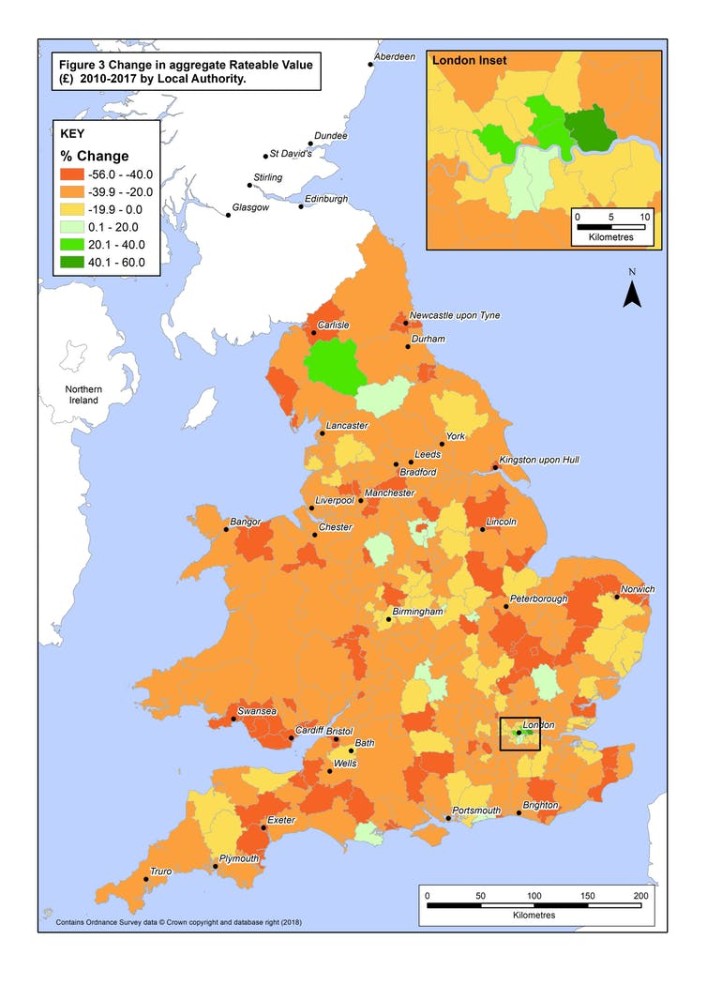 Our analysis delivers a sobering message: across most of England and Wales, the revenue generated from business rates on retail properties has diminished significantly. Local authorities in England and Wales – hit by significant funding cuts during austerity – are increasingly exposed to the vagaries of commercial real estate markets, since they now depend more on income from business rates to pay for local services.

There are a few success stories, one being the apparent renaissance of retailing in Corby in the East Midlands. The town is one of only a few areas outside central London to record an increase in both retail floorspace and value between 2008 and 2015, in part due to the success of the Willow Place shopping centre in the centre of the former steel town. For the most part, though, the outlook for retail across much of the UK remains bleak.

This article was originally published on The Conversation. You can read it here

EXPERT COMMENT: Up to 40% of UK retail space is not needed – here’s what can be done with it

The UK high street has been badly hit by COVID-19 restrictions - and it is shining a spotlight on the huge amount of retail floorspace that is not needed. Paul Greenhalgh, Professor of Real Estate and Regeneration at Northumbria University, writes about the challenges facing the sector for The Conversation.