​Associate Professor in Ecology, Mike Jeffries looks at the impact reintroducing beavers in the UK could have on wildlife and flood prevention.

For an animal that looks like a soggy fur ball with the feet of a duck in need of a pedicure and a tail cut from an old tyre, the beaver’s public image is ​doing rather well lately.

That’s despite centuries of hunting that caused the Eurasian beaver (Castor fiber) to disappear from the UK during the 1500s. Now they’re back. In 2015, two beaver families were released on the River Otter in Devon. Researchers followed this reintroduced population and tracked their distribution and health. They also monitored how the amphibious rodents affected river flow and other wildlife, along with any disruption on adjacent land. By 2019, there were at least seven breeding pairs that had spread throughout the river catchment, well beyond the release sites.

The results of the five-year trial are striking. The beavers built dams, creating wetland and ponds that slowed down peak river flows that might have caused flooding. Their engineering holds back water in the catchment area, stopping it from running off the land quickly and overloading the river, creating a bottle neck in towns downstream.

This glowing report on the flood prevention skills of beavers couldn’t be better timed. Two winter storms, Ciara and Denis, have recently brought flooding to thousands of homes in the UK. In November 2019, the National Trust, a charity more associated with stately homes, released beavers on Exmoor, also in Devon, with much of the publicity at the time touting the likely benefits they’ll bring to flood-prone homes nearby.

Wildlife has benefited from the beavers too. The small pools created by the dams had 37% more fish than comparable stretches of the river. That’s helped local birds that eat fish, while rare water voles have been able to find refuge from invasive mink in newly wetted channels. Young trout prefer the faster water of washed out dams and have been​ spotted leaping over intact dams during high river flows.

The River Otter backs up data from shorter term studies set over smaller areas that show beaver dams​ benefit the diversity of freshwater invertebrates, reduce nutrient levels in outflow, filter pollution and ​allow sediment to settle out and bury carbon.

Just as importantly, the report doesn’t shy away from raising the challenges of returning a large mammal to a landscape heavily altered by humans. Beavers burrowed and blocked some culverts, while some of the trees they felled blocked paths. They ate some maize crop (£1.33 worth, gross) and gnawed an orchard tree.

The greatest potential drawback was flooding of productive farmland. There’s a risk that these outcomes cause people to rapidly degenerate into two mutually hostile camps – those with an anti-beaver outlook that portray rewilders as naïve townies, trying to force their eco-warrior views on country folk versus a pro-beaver lobby that sees opponents as habitat-wrecking landowners who don’t care about the environment and are only interested in animals they can shoot. Thankfully, there is none of this in the River Otter report. Instead, there’s recognition of concern and examples of rapid action that can deal with problems.

The recent report feels a far cry from the one produced after the first official beaver reintroduction trial, which ran in Knapdale, Scotland from 2009-2014. From start to finish the Knapdale project was circumscribed with cautious language, and the beavers were described as fenced in and heavily monitored. These legally permitted beavers were allowed but only under strict guard. Despite this, illegal beavers started appearing elsewhere, most conspicuously on the River Tay, also in Scotland, perhaps since 2011, according to the “​Save the Free Beavers of the Tay” Facebook group.

Their presence caused the usual mix of delight and anger, and in 2010 Scottish Natural Heritage planned to remove them. But the death of a Scottish beaver called Erica that had been rounded up was a public relations mess. Once an animal has a name and can endear human observers, you better be sure it doesn’t die in your custody. Bowing to public pressure, ​the Scottish government granted beavers full legal protection in 2019.

Beavers look to be ​on the way back, all over the UK. Quite how they will get around isn’t entirely clear yet, but there seems to be widespread ​public and ​political support, and it may be that they will spread by themselves.

That will surely be better than the 1948 reintroduction of beavers in Idaho, in the US. Here, the hapless rodents were boxed up and the crates ​dropped by parachute from low flying aeroplanes.

The plan worked, apart from the one beaver that managed to climb onto the top of its airborne box only to jump off at the last minute. ​As the Chronicles of Narnia showed, tea and cakes are more a beaver’s thing than extreme sports.

This article was originally published on ​The Conversation. You can read the original article ​here. 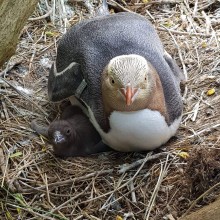